Delhi Dynamos FC to conduct trials for goalkeepers for their Under-18 boys team!

Arunava Chaudhuri 2017-05-29 Indian Super League Comments Off on Delhi Dynamos FC to conduct trials for goalkeepers for their Under-18 boys team! 2,880 Views 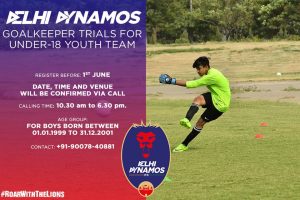 The trials will be held as per date, time and venue to be confirmed by the Delhi Dynamos to the concerned trial candidate.

The players appearing for the trials will be assessed by the youth goalkeeping coaches of Delhi Dynamos FC.

Please carry the original and photocopy of age proof and a latest passport size photo.

For more information about the Delhi Dynamos FC trials contact the club directly under the mobile numbers 90078 40881.

Ankush gets candid with Bengaluru FC and India’s star winger, Ashique Kuruniyan as they talk …