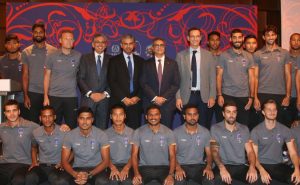 The event hosted at the Torch Hotel, Doha was an opportunity for the Dynamos camp to meet, interact and network while forming and creating new relationships with key stakeholders and players in the country and the Arab region.

Ambassador Kumaran said India and Qatar share an important and long partnership and of the 2,6 million population of Qatar, 0,7m of that are Indians.

“India enjoys a healthy and thriving relationship with Qatar and in the area of sport it is constantly growing as more opportunities of cooperation are sprouting. Last year Indian Sports Center was started, and it has allowed India to offer support to Qatar in its various thriving major sporting event hosting. We have seen top international events held here in Qatar, such as the 2006 Asian Games, the World Indoor Athletics Championships, the Qatar Tennis Open and the Doha Diamond League, annual events the country hosts successfully with Indian community in Qatar playing a role. It is exciting that Delhi Dynamos FC has chosen to work with Aspire Academy from Qatar in terms of football development. Qatar and Aspire Academy have sound and proven record and ability to deliver excellence in sport and this partnership is set to achieve a lot and strengthen further the excellent relationship between our two countries,” concluded P. Kumaran, Indian Ambassador to Qatar.

Speaking at the event, Delhi Dynamos FC owner Dr. Anil Sharma highlighted the growing bond between Qatar and the ISL side. He chronicled the short history of Delhi Dynamos, how he formed the club and the reasons for doing so.

“While living in the United States l was among several Indians who each time the major world sporting competitions, like the FIFA World Cups and Olympics took place, we found ourselves, disappointed and complaining of India’s absence or limited success at sports other than cricket. India is a young country. About 850 million Indians are below age of 35 and 500 million are below age of 21. India has more than 50% of its population below 25 and more than 65% below age of 35. It is expected that in 2020 the average age of an Indian will be 29, compared to 37 for China and 48 for Japan. These numbers are simply staggering, and l had to invest in a venture that will support the youth of India. Corporate Social Responsibility was the bedrock of my investment philosophy in India up until founding Delhi Dynamos. It was during some general discussion with my son, Rohan who has immense passion for sport he played and followed while growing up in USA that it occurred to me that if l wanted to see India do well on international sports stage l had to stop complaining and get involved and that’s how l founded Delhi Dynamos,” said Dr. Anil Sharma.

Delhi Dynamos entered a ground breaking technical partnership with the Aspire Academy last year, 2017. The world-renowned Doha-based Academy is sharing its football know-how and management expertise with the ISL club at all levels of the football at Delhi Dynamos FC. Since the start of the collaboration, Aspire Academy has been supporting Delhi Dynamos FC in various areas including coaching, training, scouting and sports science.

“I am delighted with the visit to Qatar and pleased to see that we share such excellent relationship and the bond is only getting stronger. There are many links between Delhi and Qatar at a global level and it was great to have a fruitful discussion with the ambassador and the esteemed guests today. Football has brought us close and it is through the sport that we look to work closely over the coming years. In Aspire Academy we have found a partner with proved credentials in youth sport development, football where we are working together and are very much optimistic about the future, the impact and results of our partnership set to come to fruition in around five years’ time. We look forward to players from India playing in some of the world’s top football leagues. This will be possible because India has football talent and by investing in it as we are doing at Delhi Dynamos it allows Indian youth to get the best youth development that affords them opportunities to compete with the best in the world,” Sharma concluded.

Aspire Academy Director General, Ivan Bravo, spoke of the hallmark of pursuing excellence throughout every aspect of a football club. “After we entered into a partnership with Delhi Dynamos we emphasized our firm belief in youth development as the core of any future success. I am pleased to say our partners are even at this early stage beginning to see our thinking in this regard. Recently a few of Delhi Dynamos young players have been called up to Indian National U-16 side and the U-23 national team. This bodes well for the future of club.”

“Aspire is pleased to welcome back Delhi Dynamos here at Aspire for a training camp and we embrace this great opportunity to strengthen the fruitful relationship that we have been building since 2017. Football is a fast-growing sport in India and Aspire Academy is honored to be part of this phenomenon by sharing our know-how with Delhi Dynamos FC right through its entire football operations at the club: From the logistics to operations of the club onto the development of youth players and the running of the senior team.”

“It’s important to recognize and acknowledge that the best standard in Indian football is currently played in the youth league largely because young Indian players have started to receive proper training over the past four, five years from the clubs. This is vital for Delhi Dynamos, who share our methodology of working with young players. It augurs well that Delhi Dynamos values our guidance and input along with our proved youth development pedigree which is at the core of our partnership which seeks to build the foundation that guarantees the club many successful seasons ahead,” said Ivan Bravo, Director General of Aspire Academy.

Josep Gombau, Delhi Dynamos FC Head Coach shared how the team, its coaching staff and players have resolved to compliment the sterling work from Delhi Dynamos management and Aspire Academy by working hard,

“Football is a team sport and each one of us staring from myself the team coach value our presence in India and opportunity to work with the team at Delhi Dynamos. Everyone is willing and ready to give of their best and we are looking forward to dividends from this hard work from players and everyone involved with the team,” said Gombau.

The Delhi Dynamos FC team is in Doha for their pre-season training running September 19, 2018, all part of their preparation. The team is set to play a couple of friendly matches against local teams as they prepare for the fifth season of the ISL.