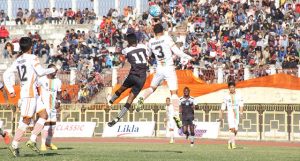 Neroca FC, who are touted to be one of the powerhouses emerging from the North-eastern part of India, have produced a sublime brand of football in the group phase of the Second Division League to set their foot on the National Finals. Having produced one after another pristine game to outwit their rivals, the Imphal-based club could be the one who you might put your money on.

On their debut last season itself, Neroca FC sent out a strong message having qualified to the National Finals with flying colours. Albeit the fairy tale ended abruptly after they missed out the gate pass to Hero I-League on their first attempt, their gallant show didn’t go unnoticed at all.

They stunned veteran Hindustan FC at the Thyagraj Stadium in their season opener this season followed by a shocking defeat against Mohammedan Sporting at their backyard.

Since then, there were no looking back for the North-eastern outfit as went on to bag all nine points from their next three outings including a 1-0 double against Southern Samity, who went on to qualify from group B following Neroca FC.

In their final match of the group-leg, they shared the points with the Black Panthers, Mohammedan Sporting but the fate was already sealed by then.

Now the boys are slated to lock their horns with Lonestar Kashmir FC, Fateh Hyderabad AFC, Delhi United, Southern Samity and Kenkre FC. No matter what happens, they’ll surely fight tooth and nail to better their record in the National Football Arena.