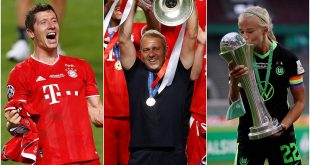 The Bundesliga is back and the Frauen Bundesliga and 3. Liga are set to follow soon. Amateur footballers are also allowed to train in small groups again and hopefully the easing of restrictions will continue following the example of professional football. “Football is fumbling its way, like the rest of society, back towards a new norm. The effects of the corona pandemic will impact us for many years to come. As a result, now is not the time to wait and see what will happen, but rather to learn from this crisis and to shape the unique footballing structure in Germany for the future,” said DFB president Fritz Keller.

Ultimately, recent weeks have made it even more clear that such a crisis can only be contained when unity, concern, solidarity and trust are at the forefront. “Values, that are still ever present in football,” said Fritz Keller. “It has become even more aparent that football is so much more than a 90-minute game on the pitch. It is about millions of fans, participants, and volunteers. It enriches our society.”

Football as a whole, including at the very top, must reflect even more and return to the fundamental values that are lived by in Germany’s 25,000 clubs and by their seven million members. The current crisis has exposed problems that were previously overshadowed by earth-shattering records. Social discussions on increased commercialisation, salaries and transfer fees, as well as some of the procedures in football associations regarding the awarding of World Cups, have contributed to many feeling out of touch with the game.

Keller said, “It’s not about pointing fingers at others. We need to be self-critical and ask ourselves, as well as considering the view from the outside, what the we at the DFB have done wrong in the past and learn from our mistakes. The crisis offers us a chance to look forward and set football up for future generations.” Because of that, the DFB president has developed a five-point plan for more sustainability in football, as a basis for work and discussion for all interest groups to actively contribute to helping re-shape the game.”

Keller: “In 2024, we will be hosting the European Championship in our country. That’s a fixed event that we can look forward to with hope. We made many promises with our application: the tournament should be a beacon for sustainability. For me, that applies to our entire association and for the future of football.”

The Asian Football Confederation (AFC) has today, August 26 announced that Sport1 GmbH will be …