East Bengal looking to sustain momentum against TRAU ahead of Kolkata derby!

Press Release 2019-12-13 I-League Comments Off on East Bengal looking to sustain momentum against TRAU ahead of Kolkata derby! 156 Views 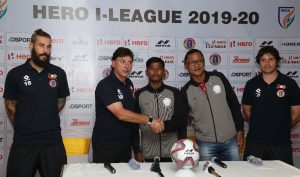 Kolkata giants East Bengal will be playing host to bottom-placed Tiddim Road Athletic Union (TRAU) FC at the Kalyani Municipality Stadium on Saturday, December 14. The match is scheduled for a 5pm kick-off and will be broadcast Live on DSport.

The Red and Golds travelled to Imphal for their last game, and emerged with a convincing 4-1 win against NEROCA FC. The victory took the Kolkata outfit to third place in the table with five points, where they currently sit, and will now take on the other Imphal-based side – TRAU FC.

Despite finding their scoring touch, East Bengal have failed to keep a clean-sheet in any of their three matches so far, which is something they need to address in this penultimate fixture before the Kolkata derby on Sunday, December 22.

Speaking ahead of the match, East Bengal head coach Alejandro Menendez said, “I think the win versus Neroca was really important. We deserved to win the other games too but to win away is a job well done. It gives a lot of confidence to the team, it helps us grow and not just in terms of results. We are building our team and we are trying to be better every day.”

On the lack of clean-sheets, he remained calm, and commented, “I think it’s anecdotal because the number of chances we have conceded has been low during the three games. I think our defence is doing a good job and I am satisfied.”

On the context of the Kolkata derby being on the horizon, he further added, “Everybody is thinking about the derby but I am focused on the game against TRAU. We are very close and for me, there is no derby until we are finished against TRAU.”

Going forward, East Bengal have been heavily reliant on the Spanish triumvirate of Juan Mera, Marcos De La Espada and Jaime Santos Colado. They will, however, be without the services of Colado against TRAU, after the Spaniard is facing a suspension.

TRAU FC, on the other hand, have had a tough start in their I-League endeavours, remaining winless after their first two fixtures. They lost to defending champions Chennai City FC in their season opener at Coimbatore and were then outplayed by Mohun Bagan, as the Mariners registered a thoroughly dominant 4-0 victory.

The visitors from Tiddim Road now await their second fixture in a space of three days at the Kalyani Stadium, and will be hoping to put on a better show this time around.

Putting things into perspective, a TRAU team official said, “We have to play in the same way but of course we have to discuss and practice according to the mistakes that we did in the last match, so for that we need to train hard and keep our focus and concentrate on the next match.”

Speaking on the morale of his dressing room, he added, “It’s tough for everyone after two losses, but my players know that they played well but we made little mistakes for which we lost the two games. Football is a sport where you cannot afford to make mistakes, even when you play better than your opponent.”