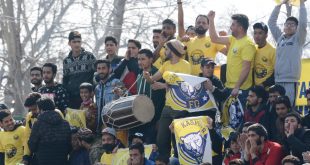 Kolkata giants East Bengal Club has announced that it has signed Spanish attacking midfielder and winger Jaime Santos Colado for the remainder of the 2018/19 season.

23 year old Oviedo-born Jaime Santos Colado is a product of the famed Spanish Youth Development system and as an attacking midfielder, who can operate from both flanks.

Jaime Santos Colado made his senior level debut at LaLiga 2 Sporting de Gijon B, where he was a regular but he never played in the league for the clubs first team.

Then after three seasons, Jaime Santos Colado left to join CD Mirandés before joing UP Langreo.

Now Jaime Santos Colado leaves Spanish shores for the first-time to move to India and Kolkata.