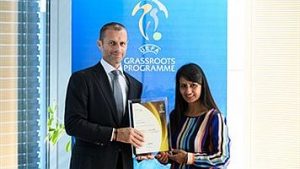 Parm Gill’s dedicated service in trying to give girls and women from the local Sikh community in the English south-east town of Gravesend greater opportunities to play and fall in love with football has been rewarded with a UEFA Grassroots gold award for her leadership qualities.

To celebrate the accolade, Parm attended an awards ceremony at UEFA headquarters in Nyon, Switzerland, to pick up her Best Leader prize presented by UEFA President Aleksander Ceferin.

“I’m overwhelmed to be nominated for this award,” said Parm. “I really don’t know how I’ve done it! Obviously the work I do for the club has been recognised, and I am just going to continue in the same way, let it grow as much as possible and go from strength to strength.”

Aleksander Ceferin is adamant that a solid grassroots structure across Europe is crucial for the game to flourish at all levels.

“I would like to congratulate Parm Gill and Guru Nanak for their fantastic initiatives. They have worked tirelessly to give members of the Sikh community more chances to play football,” Mr Ceferin explained.

“Grassroots football is crucial to the well-being of sport, and I want to ensure that UEFA continues to work closely with all our member associations, to enable everyone to have the opportunity to play and enjoy the sport we love.”

The UEFA Grassroots Awards have been run annually since 2010, and invite national associations around Europe to put forward candidates in the following categories: Best Leader, Best Club and Best Project. The awards reward excellence in the grassroots field – viewed by UEFA as essential to nurturing football’s overall good health.

The criteria behind the Best Leader category, won by Parm, entail finding a person who actively works with a club or who has initiated, started or built up a club.

Having taken her boys to play at Guru Nanak FC in Gravesend for over a decade, Parm decided three years ago that she wanted to create a women’s team. With support from Natalie Curtis, an inclusion football development officer at the Kent Football Association, the pair chose to go one step further and focus on getting young children involved.

“I think it’s important to work with Sikh women, because basically football is a ‘no-no’ [for them] in our culture; it’s just for boys or men,” Parm said. “We have to educate the community first to bring in Sikh women and the diverse community. It’s very important for girls to have female role models to look up to.”

The club began with a girls’ side, but this year the number of teams has risen to four. Parm insists that girls should have just as much right as boys to play football, although she has faced some obstacles in trying to convince parents to let their daughters join the club. However, by visiting local schools and working with the community, she has seen more and more girls becoming interested in playing.

“I never knew I was going to be part of football myself, and it means a lot to me. The fact is that it does help with your confidence. It helps you in every way possible: in school, academic subjects, anywhere you go, your workplace. It’s the love of the game, isn’t it?”

Nims Dingri has been associated with Guru Nanak for the last 35 years – first as a player, now as their manager and chairman. He accepts the challenges the club have met in order to break down traditional ways of thinking, and is full of praise for Parm’s efforts.

“You always need someone who sticks their head above the parapet,” he said. “Parm put herself out there, she instigated a lot of it, got the girls interested, and she’s done a lot of PR for us to try and get players in, a lot of footwork out there. She’s been instrumental in the club pushing the girls’ and ladies’ teams, and that’s brilliant.”

Parm is certainly committed to the Guru Nanak cause. She is officially the club’s welfare safeguarding officer, but is also a coach and plays for the women’s team. More than anything, though, she would like others to follow her lead and get even more girls playing.

“It’s very important to have female role models,” she reflected. “We see a lot of men everywhere, but I think we have to show the equality side of it. I would love to see more females do what I’m doing, and helping every community they’re in.”

The opponents for Germany’s final friendlies of the year have been announced. The Deutsche Fußball …