Eugeneson Lyngdoh: The Shillong boy who never gave up! 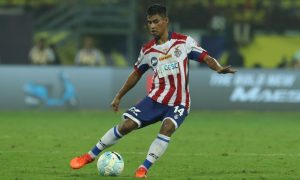 Any top-level athlete has highs and lows in their career. Just like winning trophies, awards and getting fame, athletes also have to go through certain periods when they feel completely alone. India International, and current ATK midfielder Eugeneson Lyngdoh is one such footballer, who has seen it all during his career so far.

Hailing from Shillong, Eugeneson started off as an amateur footballer at Ar-Hima FC, a club that his father had also played for in the local leagues.

“Football has always been a big thing in Meghalaya. We all wanted to be footballers when we were kids. It was even more so for me, as I used to watch my dad play for Ar-Hima,” said Lyngdoh.

At the age of 17, the midfielder started to train with Ar-Hirma, but soon had to make the choice that many athletes have to make at some point in their lives – sports or studies!

“There were not that many opportunities for footballers back then, so I obviously decided to take up studies,” said Eugeneson. “My family also felt the same. So I took up that career path and joined an engineering college.”

“But my mind was never in books. It was always out there on the field of play.”

‘FOOTBALL IN MEGHALAYA WILL NEVER FALL’

After spending three years in engineering college, Eugeneson decided to call it quits on studies, and try his luck at the ‘beautiful game’ once again. What helped him make this switch was Shillong Lajong FC’s promotion to the I-League.

“Before Lajong, the future of footballers from our state was not very bright. But the club’s promotion was like a ray of hope for us all. They brought about a new wave of youngsters trying to make it as professionals,” he said. “I spoke to my family and we decided that it was worth a shot.”

“Pradhyum Reddy gave me the opportunity at Lajong. I knew I couldn’t waste it, and knew I had to give it all to establish myself at the top level,” he said.

“Three clubs have always been at the forefront of football in Meghalaya – Langsning FC, Rangdajied United, and Shillong Lajong. It’s really sad to see Lajong get relegated from the I-League,” Lyngdoh heaved a sigh. “We need to have a club from our state in the top flight, in order to keep players coming through from the state,” he opined.

Lajong FC, in fact, have been one of the first teams to have an academy of their own, a concept which prompted other clubs to follow suit.

“Continuation will always be there. The U-13. U-15 and U-18 leagues will pave ways for these three clubs to keep giving opportunities to kids from the state to play and a platform to showcase their talents,” he said.

COMING OUT OF A DARK PLACE

Before Eugeneson got injured, he was arguably considered as the best midfielder on the subcontinent. As he moved on to Bengaluru FC from Shillong Lajong, he formed a formidable alliance with Sunil Chhetri, both for club and country.

This partnership saw Eugene win one I-League, two Federation Cups, and even saw the Blues make it to the final of the 2016 AFC Cup.

“I had a dream of playing the AFC Cup for a long time. Even when I had joined Lajong, I had told Pradhyum Reddy that I wanted to play it,” said Lyngdoh. “We came so close to winning it at Bengaluru FC. That final was a really special moment for me.”

Lyngdoh suffered two serious injuries in his career, so far. While he recovered sufficiently from the first one and went on to help Bengaluru FC reach the AFC Cup Final, the second injury, a torn lateral collateral ligament, was a more complicated affair.

This injury meant that Lyngdoh needed surgery to get back to the playing field.

“When the doctor told me that I needed surgery to save my playing career, all I thought was to get it done, done and get back to the pitch at the soonest.”

But the recovery post-surgery was difficult time for him. “I was in a very lonely place at that moment. It was not as if I did not have any friends. But what you have to understand is that when you are in a team, you are always surrounded by your fellow players,” said Lyngdoh.

“When you are recovering from a serious injury, you spend weeks or months in your hotel room, while your teammates are out travelling. It’s a very dark place, and I would not wish it upon any player,” he sighed.

“But my family and my girlfriend really helped me get through that phase. I was in a really dark place at that time, and I am thankful to all those who gave me the mental strength to come back from that.”

“The strength in my belief in God also helped me get through because I was not afraid. When everyone is away, you know that God is always with you, watching over you,” he said.

Now, the star midfielder has recovered from his injuries and is preparing for the 2019 Super Cup quarterfinal against Delhi Dynamos FC. As he psyches himself up for the game, Lyngdoh quips a word of advice for all the young, aspiring footballers out there.

“Never be arrogant about anything. Always keep yourself grounded. Stay positive, and determined all throughout. You need to stay mentally strong to keep your dreams alive,” he signed off.