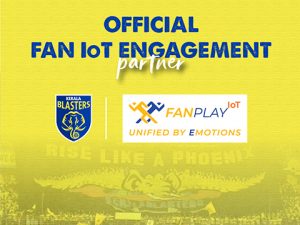 Kerala Blasters have announced FanPlay IoT (Internet of Things) as their Official Fan IoT Engagement Partner for Season – 7 of the Indian Super League.

FanPlay, the world’s first sports IoT platform that integrates advanced wearable technologies with world-class digital platforms aims to create a seamless connection between Elite Sports and Amateur enthusiasts. The company’s products are designed to provide fans with a unique opportunity to showcase their love for the club thereby transforming the way fans can engage with players during the match.

Dr. Mohan Kumar, one of India’s foremost experts in Wearable Systems and the Founder of FanPlay IoT said, “FanPlay IoT leverages advance in wearables, IoT and cloud architectures – blends them with Neuroscience, to bring fans to the front and center of the game. Kerala Blasters Fans are always charged with unbridled love for their team that is expressed in so many ways – from traveling miles to watch a game to painting their houses Yellow. In these pandemic times, they need a way to show their solid support and love for their team playing in remote Goa. The FanPlay IoT platform allows them to do this in near real-time through the power of IoT. Recently, we rolled out this platform for CSK during the IPL 2020 and collected a Million Heartbeats. We are confident that the KBFC Fans will exceed this easily!”

The coming weeks will see the launch of a variety of Wearables & IoT Devices, ranging from Fan bands, Pendants, Key chains and Pennants, all incorporating intelligence for one purpose – capturing a fan’s excitement through their heartbeat, wherever they might be on the globe, and beaming it back to KBFC digitally via the FanPlay IoT application. On the platform, fans will be able to compare scores with their friends and challenge each other for a position on the leader board. The most passionate fans in every game and across the season will be recognized and rewarded.

Kerala Blasters director Nikhil Bhardwaj said, “We are always looking at ways to provide our fans, who not just take pride in being called the largest but are also undoubtedly the loudest, unique and innovative ways to connect and interact with the team, especially during this season wherein the games are being played behind closed doors and the players are in a bio-bubble. Through technological innovations from FanPlay IoT, we hope to provide a platform wherein our supporters can make their passion heard. We are very excited to see some record-breaking numbers from our ardent supporters and hope it brings us all closer together this season, wherever we are.”

Previous Manuel Neuer voted Die Mannschaft Player of the Year 2020!
Next PUMA & Neymar invite you into the world of FUTURE Z 1.1!