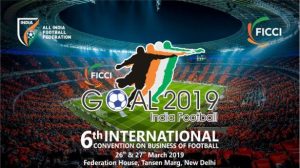 The Federation of Indian Chambers of Commerce and Industry (FICCI) is organising the sixth edition of ‘GOAL 2019’, the annual convention on the business of football in India, on March 26-27 at FICCI, Federation House, Tansen Marg in New Delhi.

‘Goal 2019’ is slated to be inaugurated by Col. Rajyavardhan Singh Rathore, Minister of Youth Affairs & Sports, Government of India; Abhishek Bachchan, Bollywood Actor and Co-owner, Chennaiyin FC, will deliver a special address and Praful Patel, President, All India Football Federation (AIFF), will give the keynote address.

The convention, supported by the governing body of Indian football, the AIFF, will be an exclusive platform for networking and dialogue among senior decision makers in Indian and international football fraternity. The emphasis will be on knowledge-sharing and understanding the business opportunities in Indian football.

Officials from the Union Ministry of Sports and Youth Affairs and Sports Authority of India (SAI), Federation of International Football Association (FIFA), Asian Football Confederation (AFC) will participate in the convention. It will also have the presence of representatives of various international leagues, state football associations, Indian and international clubs and academies, football coaches, players and technical experts, commercial brands with a stake, NGOs and students from various universities.

Over the years, FICCI ‘GOAL’ has been instrumental in organising seminars with AFC for SAFF member countries, presenting knowledge papers on Foreign Direct Investment in Indian football and numerous other initiatives.

Indian national team goalkeeper Subrata Pal joins us on AIFF TV, as he speaks about …