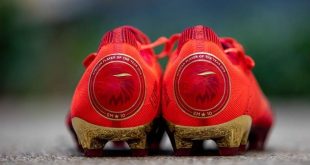 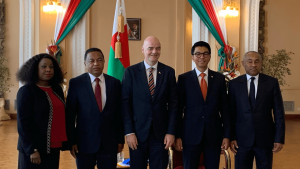 Today the Presidents of FIFA and CAF met with the President of the Republic of Madagascar Andry Rajoelina at the Iavoloha Presidential Palace in Antananarivo, Madagascar.

Speaking at the meeting Infantino said: “Madagascar possesses such amazing football talent. The journey of the Barea to their first AFCON this year was wonderful and I hope that by continuing to support our friends at the FMF and with the encouragement of the Malagasy government I am sure we will be seeing more positive results in the near future.

The President of Madagascar said, “We are humbled by the visit of FIFA President and his delegation to Madagascar where the national football team the Barea has brought unity and cohesion back into the country through its outstanding performance during the last AFCON. Madagascar is taking the development of football very seriously and with the investment we are undertaking in football with the construction of 32 pitches and stadiums we want to take football to new heights.”

CAF President and FIFA Vice President Ahmad said, “I am proud to be here today as a Malgache and as President of CAF. I believe in the power of football to bring positivity to the lives of people, in particular young people and I am encouraged by President Rajoelina’s commitment to getting more young Malgasies, who make up seventy percent of the population here, involved in football.”

Following their meeting with President Rabekoto the delegation visited the FMF offices where they met with members of its Executive Committee and took part in a press conference.