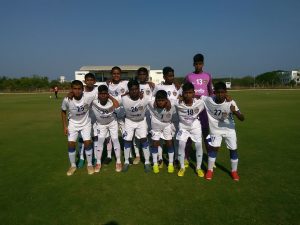 The Chennaiyin FC Under-13 team began it’s Hero Sub-Junior League campaign in the Chennai zone with a 11-0 romp of Great Goals in an away fixture at the SSN College Ground today. Chennai-born midfielder K. Srinith starred with a first-half hattrick as substitute Karan Chaktravarthy who hails from Coimbatore bagged a brace in the second-half. The Chennaiyin FC U-13s scored seven goals in the first period and had a total of seven different scorers apart from an own-goal by Great Goals in what was a one-sided encounter.

The Chennaiyin FC U-13s’ next challenge is a home game against Chennai City FC on Thursday, March 28 at the same venue SSN College Ground, which serves as the home ground for the Chennaiyin FC youth teams.

Chennaiyin FC got off to a flier, taking the lead in the 8th minute, courtesy Pondicherry boy K. Karmugilan, who was quick to pounce on the rebound from skipper Akash Mathi’s shot. Chennaiyin FC went on to add two goals in quick succession, first from a Varun Kumar long-ranger in the 12th minute, followed by K. Srinith’s strike in the 15th minute.

There was no stopping Chennaiyin FC in a whirlwind first half, as Srinith added to his tally soon after to make it 4-0. Srinith turned provider three minutes later, when his through ball found midfielder Ajay Kumar, who kept his composure to make it 5-0.

All the action was in the Great Goals half, as Chennaiyin FC ended the first half with a flourish. Ajay’s chipped pass into the box was converted by Mohammed Irfan. And in stoppage time after the stipulated 35-minute half, Srinith completed a first-half hattrick to send his side 7-0 into the break.

Great Goals put on a better display in the opening stage of the second period, ringing in the changes and shading possession of the ball thereafter.

But it was Chennaiyin FC’s second-half substitutes who added to the goal tally. Coimbatore forward Karan Chakravarthy, who had just come on, made it 8-0 in the 61st minute. E. Kannan too who had just been introduced, scored from distance to make it 9-0 two minutes later.

There was more to come in the closing stages, as the Chennaiyin FC U-13s hit double digits when a Great Goals own goal following an off-target shot from Ajay made it 10-0. Then in the closing moments, another Chennaiyin FC substitute D. Vishal combined with Karan as the latter completed his brace with a header that made it 11-0.