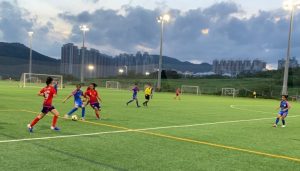 Over 100 girls will participate in a four-team format for the U17 Women’s tournament organised under the aegis of AIFF. India is hosting the FIFA U-17 Women’s World Cup in India in October 2020. The Under-17 Women’s Tournament is aimed to provide an opportunity for the players to showcase their talent for selection to the Indian team.

The tournament is scheduled in mid-November. It will be telecasted live on Star Sports, Hotstar and Jio TV.

By 2021-22, the Children’s Leagues are expected to have a footprint in 40 districts across 12 states with participation from over 38,000 children.

Nita Ambani said, “It’s my vision to introduce millions of children to multiple sports disciplines. Over the years, through the initiatives of Hero ISL Club academies, Reliance Foundation Young Champs and Reliance Foundation Youth Sports, we have made significant progress in promoting football, identifying talent and providing a professional environment for young India to showcase their skills. Over 9 million children have been impacted through our RF Youth Sports and RF Young Champs program.”

“Hosting of the FIFA Under 17 World Cup in 2017 has ignited the interest amongst youngsters towards football and I am certain that the FIFA U-17 Women’s World Cup 2020 will further accelerate this journey. Through the two initiatives of Women’s U17 Tournament and Children’s Leagues, we sincerely hope to further popularise the sport in India.”