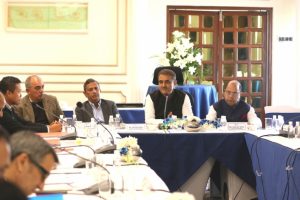 A Futsal club completion will be a part of the AIFF competition calendar from the 2020 season onwards, the AIFF Executive Committee unanimously decided during the meet in Delhi on December 10, 2019.

The AIFF holds all rights for any Futsal Championship all over the country and any external party won’t be able to hold any championship related to the format without prior approval from the State Association, and the AIFF.

“As part of AIFF’s holistic plan to develop Indian football and involve all sections into the playing community, we look forward to Futsal bringing in a significant change in the demographics of Indian Football. From that aspect, the Futsal Championship will surely add more value,” AIFF general secretary Kushal Das stated. “The format will attract the youth — both boys and girls, further helping them to enhance their technical skills.”

“It is played at a fast pace, demands fast thought process. We at AIFF strongly feel Futsal should be a part of the National Planning agenda of football,” the Technical Director added. “I have found out that in certain states there is a huge passion for the game. That’s gives us the confidence to go deeply into the developmental process of Futsal and helping the State Associations with implementation of the strategic plan.”

Futsal has been increasingly popular with the AFC Member Associations with Iran finishing third in the FIFA Futsal World Cup in 2016.

Doru explained that as “futsal allows the players to frequently touch the ball, it creates more scoring opportunities, constantly developing the creativity and decision making process in the attacking third.”

“It will help develop tactical awareness of the players, especially during the transition process.”

The All India Football Federation has invited clubs from the Indian Super League, I-League and …