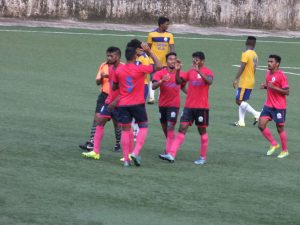 Newcomers FC Bardez scored a triumphing 5-0 win over the Sesa Football Academy in the Goa Police Cup at the well filled Duler Stadium in Mapusa for their first ever win.

FC Bardez took complete control of the game right from kick-off. In the 1st minute Myron Mendes was taken down just outside the box by Dhiraj who was shown a yellow card. The resulting Jessel Carneiro free-kick went just wide. In the 13th minute Rowilson Rodrigues produced a good run taking the ball past two defenders and passing the ball to Girish who in turn crossed inside the box but Mendes couldn’t convert the chance.

In the 16th minute FC Bardez got a free-kick just outside the box. Carneiro stepped up to take it but his curving shot produced a wonderful save from the Sesa Football Academy keeper. Just before the half hour mark Alesh Sawant swung in a well taken corner and Lenstan Afonso was there to give his side the lead.

In the 38th minute Richard Costa generated a powerful low drive that skimmed wide of the post. Next Mathew and Carneiro teamed up to deliver a lovely cross inside the box, Mendes got the ball, controlled it and hit the volley which went just over the crossbar. Just before the break goalscorer Afonso was replaced by Jesmon Soares.

Both teams played a good possession style of football after the break. When Carneiro got the ball he crossed it in the box where Sawant was there to volley it home in the 51st minute.

That was the cue for FC Bardez to open the floodgates as they ran riot over the Sesa Football Academy backline. 62nd minute and Carneiro curled a free-kick into the box, Peter Carvalho climbed highest but couldn’t direct his header goalwards. FC Bardez made it 3-0 when another Carneiro corner was headed home by Rowilson in the 71st minute.

Carneiro was in the thick of the action all game and he was finally rewarded with a well-deserved goal five minutes before full-time when his placed effort from outside the box went in after striking the post. The main man, the captain put the seal on a fine win when his 25-yard strike went through the keeper and into the net minutes before the final whistle.

This thumping win means that Armando Colaco’s men now have accumulated a draw and a win in their two group games. They must now await the result of the game between Sesa Football Academy and Dempo SC to find out whether they will make the last four or not.

In the day’s other match played at Raia Panchayat Ground, Goa Police registered a hard fought 1-0 win over Corps of Signal. Rajesh Salgaonkar scored the winner in the 70th minute to give his side the three points.