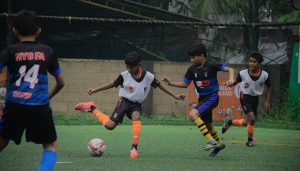 The Gokulam Baby Football League kicked-off amidst much fanfare in Kozhikode, Kerala, earlier this week, as it was inaugurated by the I-League club’s Technical Director Bino George and CEO Dr Ashok Kumar.

Known to have brought a number of local Keralite players through to the top echelons of football in the country, the club witnessed a lot of support from the local fans, who encouraged the next generation in their endeavours.

“Gokulam Baby Football League is another huge step forward for Gokulam Kerala FC. The response we got from the academies was great. On the first day itself, there was a huge turnout to watch the matches and parents and their families came to watch their dear ones play,” said CEO Dr Ashok Kumar.

Technical Director Bino George marvelled at the local talent on display in the Gokulam Baby Football League, stating that it is activities exactly like these that helps the club bring local players through the ranks.

“The talent pool we saw today was something inexplicable. These kinds of activities help us to scout talented kids and groom them into professionals. The huge turnout and response we got are an example of football culture Malabar has,” he said.

The former Gokulam Kerala FC head coach further went on to praise the All India Football Federation for starting the Golden Baby Leagues initiative, that looks to encourage professional football clubs to build their own base at the grassroots level.

“It is a good initiative by the AIFF to make it mandatory for every club so that the clubs will invest more in grassroots activities. Gokulam Kerala FC will and always support such endeavours,” said Bino George.

Dr Ashok Kumar also believes that such leagues further helps the club connect with the local communities that form a major part of their fan base.

“We are focused to conduct more such grassroots activities and it helps us to connect with communities in Malabar,” he rounded off.

Previous AIFF to look into Mumbai City FC’s allegations of racism against referee!
Next NorthEast United FC vs Bengaluru FC now open to spectators, but to kick-off earlier!

I-League side NEROCA FC have announced the signing of midfielder Akbar Khan, who returns to …