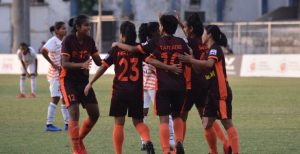 Gokulam Kerala FC registered their fourth win in as many matches at the 2018-19 Indian Women’s League, as they beat Panjim Footballers 2-0 at the Guru Nanak Stadium in Ludhiana on Saturday.

India internationals Sanju and Anju Tamang were on target for the Kerala side, but it was their teenage sensation Manisha, who bossed the midfield and stole the show to take the Player of the Match award.

It was defence-vs-attack all through as Gokulam Kerala FC took the initiative from early on. The Kerala side were without their charismatic captain Dalima Chhibber, who had picked up a knock in the previous game.

However, Sanju, who had the captain’s armband for the day, responded brilliantly. The India international received a pass from the right, set herself up, and unleashed a drive into the bottom corner.

Manisha was on form, and bossed the opposition in the middle of the park. With a little over 10 minutes of regulation time left in the first half, she turned a couple of defenders, switched to her right foot, and pulled the trigger. However, it was saved by the keeper.

Gokulam Kerala FC picked up where they left off in the second half as Manisha dictated terms from midfield again. She linked with Bawitlung, who played a delicious one-two with Babysena Devi to break free of her marker, but Panjim Footballers keeper Ashika Gadekar came off her line and swept the ball off the Mizo forward’s feet.

However, Manisha stamped her authority in the game once and for all, when she sold a dummy at the edge of the penalty box, and played a delicate through ball to Anju Tamang, who merely had to beat the keeper, which she did with great aplomb.

This win took Gokulam Kerala FC one step closer to the semifinal spot, as they now have 12 points from four matches – a perfect record in the tournament so far.