Press Release 2020-02-20 I-League Comments Off on Gokulam Kerala FC hopeful ahead of away game against NEROCA FC! 169 Views 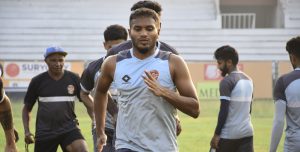 NEROCA FC will be playing host to Gokulam Kerala FC in the I-League at the Khuman Lumpak Stadium on Friday, February 21. The match is slated for an afternoon kick-off at 2pm and will be broadcast LIVE on 1Sports, with online streaming available on the Fancode app, website, and the 1Sports Facebook page.

The two sides have just five points between them, but the level of competition in the middle stack of the league has rendered completely different complexions to their seasons. NEROCA are in the relegation zone with 12 points, while Gokulam Kerala FC are in fourth position with 17 points.

The Imphal-based club registered a stunning 5-0 victory over city rivals Tiddim Road Athletic Union (TRAU) about two weeks ago and the victory seemed like the perfect boost to reinvigorate their season.

However, NEROCA have failed to follow up on their derby day bragging rights, managing to play out only a goalless draw at home against Indian Arrows before being humbled 2-6 by league leaders Mohun Bagan away at Kalyani.

Speaking ahead of the game, NEROCA head coach Gift Raikhan said, “It was unfortunate. It was a very shameful result against Mohun Bagan but we had chances and we fought. Looking forward to the next game against Gokulam Kerala, they are a good team. They are a strong attacking side. Against them, we have to give everything we have and more.”

Gokulam Kerala FC, on the other hand, will be coming into this fixture on the back of a derby win of their own, after achieving a 1-0 result in Coimbatore against Chennai City FC. However, if Gokulam Kerala FC are to sustain their steam, anything less than three points might see them slip out of the top four, based on results elsewhere.

“The victory against the defending champions, who are a team that plays very good football, has given a lot of confidence. However, it’s going to be a tough game away against Neroca but we remain hopeful of getting another win,” says Gokulam Kerala FC head coach Fernando Valera.

Gokulam Kerala FC have a tough run of fixtures ahead, with Punjab FC, East Bengal and Churchill Brothers waiting for the Malabarians in the next three games. Coach Varela emphasised on the importance of three points by adding, “Three points tomorrow (Friday) can help us close the gap at the top. We always focus on every game as they come and right now, we are focused on tomorrow.”

Previous VIDEO: Promo for 2020 FIFA U-17 Women’s World Cup in India!
Next Borussia Dortmund to have two shirt sponsors in future!

As XtraTime reports from Kolkata, Mohun Bagan youngsters Sheikh Sahil and Subha Ghosh had their …