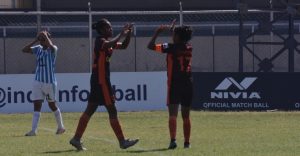 Gokulam Kerala FC were triumphant once again, as they beat a resilient FC Alakhpura side 1-0 via a goal from their teenage sensation Manisha, at the Guru Nanak Stadium in Ludhiana on Monday, May 7.

Gokulam Kerala FC, who had shown their strength by beating defending champions Rising Students Club 5-0 in their last game on Sunday, started off at good pace. However, Alakhpura FC came out with a concrete plan to thwart the side from Kerala and pounce on the counter attacks.

Their plan worked perfectly, as they kept Gokulam Kerala FC at bay for long periods. It was only second half that Gokulam Kerala FC got a real chance. Manisha broke through on goal, and Alakhpura FC keeper Neelam to beat in front of her. However, she tried to dink the keeper on the half volley, and the ball sailed over the bar.

Manisha finally made her mark in the game, when she nodded a powerful header into the Alakhpura FC net 71st minute off a cross from the right flank. This being her fourth goal of the tournament, propelled her back to the top of the scorers’ charts, where she is tied with Sethu FC’s Nepali striker Sabitra Bhandari.

Alakhpura FC had their best chance towards the end of the game, when Jyoti beat the offside trap, broke free from the Gokulam Kerala FC defence and only had keeper Linthoi to beat. However, the India international swiftly slid in and blocked the shot from close range.

Over at the GHG Khalsa University Ground in Ludhiana, Hans Women FC fought hard in an exciting 3-2 win over Panjim Footballers, courtesy a brace from striker Anushka Samuel. Hans Women FC had got off to a good start with Uchenna Rita Casia Ukachukwu’s early effort going wide of the post.

Anushka put the Delhi side in front right after the half-hour mark, but Panjim Footballers forward Karishma Shirvoikar soon equalised as she finished off a brilliant pass from Jeromina Colaco. Anushka scored yet another goal in the second half, but that too was equalised via a penalty by Karishma.

In the end, it was Jyoti Ann Burrett, who scored the winning goal in the 80th minute, to hand Hans Women FC the three points.