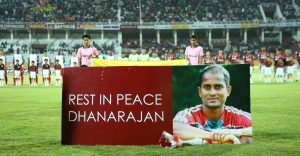 Gokulam Kerala FC have announced that the proceeds from the ticket-sales of their next I-League 2019-20 home game against Churchill Brothers will go to the family of Radhakrishnan Dhanarajan.

The former Mohun Bagan player recently collapsed on the pitch while playing a local football match. However, on being rushed to a nearby hospital, he was pronounced dead by the doctors. In a recent announcement, Gokulam announced that they would forward the proceeds from the ticket sales of the match to the deceased footballer’s family of the footballer who hails from Kerala.

Gokulam Kerala FC technical director Bino George, who has known Dhanarajan for a long time, requested all the fans to come to the stadium, in order to join the cause.

“I know Dhanarajan from his playing days and his death was a real shocker to me and all football fraternity. Our president VC Praveen proposed to help the family by handing over ticket revenues to his family,” said Bino. “I am happy that as part of the GKFC family, we are able to help his wife and children. I also request all the fans to come to the stadium and be part of the cause.”

Gokulam Kerala FC has previously also been known to be part of social causes, and had made matchday tickets free for all women, in order to help promote the sport. However, CEO Dr Ashok Kumar announced that the tickets for the game against Churchill Brothers will not be free for women, as the proceeds are set to go to the bereaved family.

“We believe we have a duty to help the bereaved family. Football is not just a game as it has the power of bringing people together,” said Dr Ashok. “So we decided to hand over the money collected from ticket sales to the family. There won’t be any complimentary tickets for the match and also it won’t be free entry for women.”

The match between Gokulam Kerala FC and Churchill Brothers is scheduled to take place on Sunday, January 26 at the EMC Corporation Stadium in Kozhikode, at 7pm IST.