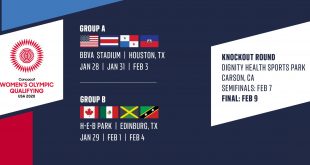 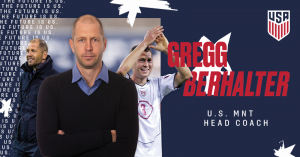 Berhalter, with 25 years of experience as a player and head coach for clubs in England, Germany, the Netherlands, Sweden and the United States, becomes the first U.S. World Cup veteran to take the reins of the U.S. Men’s National Team. In addition, he is the first U.S. MNT boss with experience as a player and a coach both domestically and internationally.

Chosen by U.S. Men’s National Team General Manager Earnie Stewart following a thorough search process, Berhalter’s appointment was officially ratified by the U.S. Soccer Board of Directors on Dec. 1 by a unanimous vote.

Later in the day, The Glasshouses will host “The Future is US” Fan Event from 5:30-7:30pm ET. Fans are invited to enjoy food, beverages and music as well as a conversation with the new U.S. Men’s National Team head coach. Entrance is free; however, a reservation is required for the limited-space event.

“We are excited to announce Gregg as the next head coach of the U.S. Men’s National Team,” said Cordeiro. “As an experienced former National Team player and highly regarded professional coach, we are confident he is the best person to guide our program forward. We are looking forward to formally introducing him on Tuesday in New York.”

Known as a fiercely competitive and intelligent player, a natural leader and a detailed, forward-thinking manager, Berhalter spoke of pride in returning to lead a team for which he earned 44 caps and had the honor of representing at two FIFA World Cups, including the USA’s memorable run to the Quarterfinals in 2002 in Korea/Japan.

“This is a tremendous honor,” Berhalter said. “Having played for the National Team I know what it means to represent our country. I believe in our players and our program, and together we will work to build something special and develop a team that will make our supporters proud.”

The 45-year-old has eight years of coaching experience and has earned a U.S. Soccer PRO License and a UEFA ‘A’ License. Most recently he has served in the dual role of Head Coach and Sporting Director with Columbus Crew SC. During his five seasons in Columbus, Berhalter oversaw all soccer operations for the club, leading the side to the MLS Cup Playoffs four times, as well as the 2015 MLS Cup Final and 2017 Eastern Conference Final.

Unlike many of his peers, Berhalter went abroad to begin his career in management, guiding Swedish club Hammarby from 2012-2013. Berhalter began transitioning to the technical side of the game towards the end of his playing career, first working to scout opponents while with German club 1860 Munich from 2007-09. His first official technical role came when he served as an assistant coach during the final season of his playing career with the LA Galaxy in 2011.

“After a very thorough process, I am absolutely convinced Gregg is the right man to lead the National Team program moving forward,” Stewart said. “He ticks all the boxes with his background as a person, a successful coach and an accomplished former international player.”

Berhalter was chosen as MNT head coach after an extensive selection process led by Stewart, who worked alongside U.S. Soccer’s Chief Sport Development Officer Nico Romeijn and Chief Soccer Officer Ryan Mooney in developing the profile for the head coach of the U.S. Men’s National Team.

In addition to two FIFA World Cups, he has extensive playing experience in international competitions in this region and beyond, having been a part of two World Cup Qualifying cycles, two FIFA Confederations Cups (1999, 2003), the CONCACAF Gold Cup (1998) and Copa America (1995).

A native of Englewood, N.J., Berhalter spent a majority of his 18-year professional career abroad, playing as a defender for clubs in the Netherlands, England and Germany. The center back began his career in the Netherlands, playing two seasons each with PEC Zwolle, Sparta Rotterdam and SC Cambuur, before a year with English Championship side Crystal Palace.

After his impressive showings during the USA’s two Knockout Round matches at the 2002 FIFA World Cup, Berhalter moved to Germany where he spent a combined seven seasons with Energie Cottbus and 1860 Munich, captaining both clubs for multiple seasons before returning to the U.S. in 2009. Ending his career with the LA Galaxy, Berhalter helped the club secure three pieces of hardware, winning the 2010 and 2011 MLS Supporters Shields as well as the 2011 MLS Cup.