Ugandan forward Henry Kisekka’s quality finish ensured title candidates Gokulam Kerala FC put it over a young, resilient and at times impressive Indian Arrows side by a solitary goal, in a 13th I-League encounter at the Tilak Maidan in Goa. The Indian Arrows gave the in-form Malabarians a mighty scare, particularly after the latter had to play the last 15 minutes with 10 men.

Gokulam Kerala FC started strongly and both Joseph and Kisekka missed a couple of sitters in the opening 20 minutes of the game. The Indian Arrows, however, found their grooves by then and Vikram Partap was impressed with his surging runs down the right.

By the time the half ended, Gokulam Kerala FC were left wondering what they needed to do to break down the young Indian Arrows as their goal was being manned more-than-ably by the young Samik Mitra, who also had a good confident half.

After the breather, and quite against the run of play, Gokulam Kerala FC went ahead within five minutes of the resumption. A long ball found Kisekka on the top of the Arrows box on the right. The Ugandan got away from his markers in a flash and neatly placed the ball in the left-hand corner of the Indian Arrows net.

The game continued to ebb and flow and then in the 76th minute, a wonderful Gokulam Kerala FC move resulted in a Joseph header deflecting off a defender and going in, but Samik brought off a brilliant save again to deny Joseph on the day.

Five minutes later, Etienne brought down an onrushing Aman Chetri after the young forward had dispossessed him in-front of goal and was headed towards it. With just the keeper ahead, the referee had no option but to give marching orders to the burly Trinidadian centre-back.

Hormipam, of the Indian Arrows, for his resolute defensive work was awarded the Hero of the Match. Gokulam Kerala FC have now won both their opening games and now sit pretty on top of the table with six points. 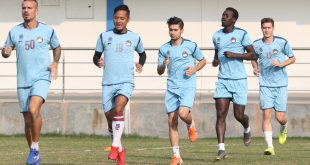