Hero U-17 Women’s Championship an opportunity to assess talent!

Press Release 2019-11-12 General Comments Off on Hero U-17 Women’s Championship an opportunity to assess talent! 553 Views 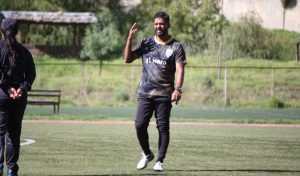 As India prepares to host its second ever FIFA World Cup, the junior women footballers are getting set to take their shot at being a part of the team that will represent the country in the mega event. With about a year to go, four teams – the Lionesses, the Panthers, the Tigresses and the Cheetahs – are now all set to kick-off the Hero U-17 Women’s Championship in Kalyani, West Bengal.

The players participating in the four-nation tournament will be closely watched by the coaching staff of the India U-17 Women’s Football Team, as they look to build the best squad ahead of the 2020 FIFA U-17 Women’s World Cup.

India U-17 Women’s Team Assistant Coach Alex Ambrose will himself be taking charge of one of the four teams, and believes that the exposure that the girls will get by playing this tournament would be huge.

“It’s a huge thing that these girls will get to play in a tournament like this. The pressure will be there, because it will be broadcasted across the country. They need to know that when they represent the country, the nation will also rally in their support,” said Ambrose.

Ambrose also opined that the tournament will give him and head coach Thomas Dennerby the chance to look at a large pool of players from the country, as they shape the India U-17 Women’s Team for the FIFA U-17 World Cup next year.

“It really is a unique tournament, where we will get to see so many players from across the country showcase their talent. The Head Coach is also here assessing all the players, and i think it could go a long way in helping us shaping the team for the World Cup,” he said.

Indian Women’s Footballing legend Bembem Devi, who is also known as the Durga of Indian Football, will also be taking charge of one of the teams in the tournament. She believes that with a year to go for the World Cup, this is the right time to host this tournament, as it would give the talented players a platform.

“We have just about a year to go, and the Hero U-17 Women’s Championship could help bring into focus a number of talented girls. This could only help the India U-17 team that would play in the World Cup, as it could help the coach have a bigger pool of players to pick from, and competition for places is always a great motivator for the players to improve themselves,” said Bembem.

She further went on to state that Women’s Football in India has grown over the last few years, and more concentration on youth tournaments will only help in the long run.

“Of course, such initiatives are great for the girls who want to play football at the top level when they grow up. Over the last few years, Women’s Football has improved by leaps and bounds. We now have a professional league that has already supplied the National Team with so many players,” she said. “On top of that we now that a tournament where the younger girls can showcase their talent. It really helps to spot the talented players and groom them for the future.”

Many of these girls have not played in matches that have been broadcasted throughout the nation before. However, with the tournament being broadcasted in English, Hindi, Tamil, Telugu and Bengali by the Star Sports Network, Ambrose believes that it is a good opportunity for the players to soak-up all the experience before the FIFA World Cup.

“I am sure that they will look at these kind of events and look to learn from the experience of playing under pressure. They need to look past the pressure, focus on the game, and try to be as successful as possible,” he said.