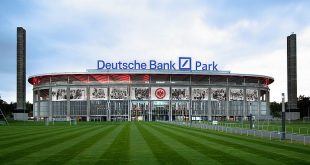 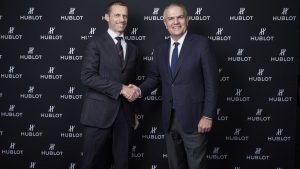 Today marks 500 days until the first match of UEFA Women’s EURO 2021, which will be held in England. Hublot will serve as one of the European tournament’s official partner, providing the now iconic Hublot electronic referee boards used by fourth officials to indicate additional time and substitutions.

“This is a wonderful time to be involved in women’s football and it is great to have found a like-minded partner in Hublot who share our goals and ambitions,” said UEFA’s head of women’s football, Nadine Kessler.

“With Hublot becoming an official partner and supporter of UEFA women’s football across our competitions and campaigns, including Together #WePlayStrong, we hope that this will help us to take our sport to a wider audience as well as strengthening our existing relationships with those who are already committed to playing football.”

The deal with Hublot follows similarly groundbreaking partnerships with Nike, Visa and Esprit during the last 15 months. In 2017, UEFA undertook the unprecedented decision to unbundle women’s football rights from the men’s game.

“The appeal of women’s football is growing at an impressive rate and we are delighted to have such a prestigious brand as Hublot joining us as a partner, who are committed to promoting the women’s game,” said Guy-Laurent Epstein, marketing director of UEFA Events SA.

“Agreeing partnerships with world famous brands like Hublot is exactly the kind of results we envisaged when we unbundled the rights from the men’s game over two years ago and is proof women’s football can be supported on its own merits.”

This season’s UEFA Women’s Champions League final will take place in Vienna on 24 May, while the final of UEFA Women’s EURO 2021 will be held at Wembley Stadium in London on August 1 next year.

“This is a wonderful partnership and we are so excited to extend it to UEFA women’s football, and to be working together with UEFA across its competition profile. Football is the most exciting, most passionate game on the planet and the perfect match for Hublot,” said CEO Ricardo Guadalupe.

“Like UEFA, Hublot is obsessive about quality, has ambitious plans for the future and is proud to know a loyal fan base. It’s a match made in heaven! We couldn’t be more proud to partner UEFA and to be supporting the development of the beautiful game.”

Hublot’s new deal for UEFA Women’s EURO 2021 extends a long-standing partnership with European football’s governing body that started ahead of UEFA EURO 2008. Since then, the Swiss watch brand has been present at every UEFA EURO and will return this summer for UEFA EURO 2020, which will be held across 12 cities.