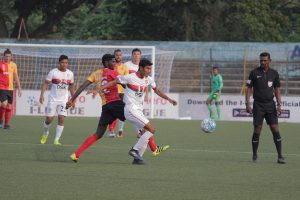 Planning put into practice was what DSK Shivajians FC did as they overcame a strong but currently struggling East Bengal Club at the Barasat Stadium in Kolkata. Youngster Mawihmingthanga netted the all important goal on the 29th minute, courtesy a diving header.

While Mawihmingthanga provided the winner, it was a heroic performance by keeper Subrata Pal in goal that proved crucial in netting the three points. The veteran Indian goalkeeper, put in a season’s best performance making over ten saves to keep a clean sheet.

While the game kicked off with some scrappy duels in midfield, the first real chance of the game came when Seityasen Singh whipped in a cross from the right but failed to find Mawihmingthanga who had made a beautiful run in on the back post. Two minutes later on the eight minute, the Manipuri managed to find the Mizo, but the attack left Subhasish Roy Chowdhury in the East Bengal goal untroubled.

DSK Shivajians, who started the game with uncanny aggression continued to spray the ball around in the home side’s final third, with the Red and Gold Brigade finding their only outlets in Rowlin Borges and Robin Singh up top. Subrata Pal, relatively untroubled until now, was to have his hands full come the 23rd minute where he perfectly blocked Chris Payne’s lob. On the other end, a few moments later, it was Mawihmingthanga who put the visitors ahead. The diminutive Mizo made a late run in the box to find himself unmarked in the box to put in a backward header into the net. This however signalled the beginning of an East Bengal onslaught with Subrata Pal making four world class saves before half time. The East Bengal attacks were peppered with attacks by DSK Shivajians through Juan Quero and Holicharan Narzary, who has increasingly made the number 11 shirt his own.

The second half kicked off, with much more of the same, with Subrata Pal being tested thrice in the opening exchanges. Mawihmingthanga, who scored off a fantastic header, sought to double his tally through a brilliant diving header via a Seityasen Singh cross. He was however denied by the home side custodian Subhasish Roy Chowdhury.

Following this piece of play, Subrata was again called into action on two occasions, but his six foot one inch frame was proving to be an unbreakable wall for the East Bengal attackers. Holicharan and Quero came close on the 60th and 71st minute respectively. The rest of the game was, however, one man – Subrata Pal. The goalkeeper made close to ten saves in the remaining twenty minutes, galvanising his side as he put in the performance of a lifetime. With the likes of Ralte, Wedson, Robin, Jackichand, Rowlinn and even Ivan Bukenya unable to beat the keeper, his performance on the night won the three points for DSK Shivajians who ended the game a goal up.

“I’m delighted with the desire, character and the dedication that my players have shown, not only today, but from the first day of pre-season. I ask for two things in every game. A clean sheet and three points, and tonight we got both, and for that I’m so proud of our players,” commented DSK Shivajians manager Dave Rogers.

“I wish more teams in the I-League would set up Academies and infrastructure and develop the youth of this country. India has fantastic ability and talent. I have complete faith in the U-22 players of this country,” added Rogers, commenting on the potential that he sees in the young players today.

DSK Shivajians will next play Bengaluru FC in Bengaluru on the April 22.