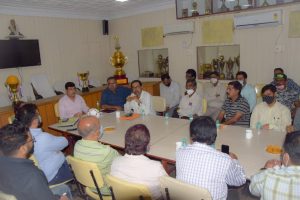 The IFA (Indian Football Association) today, February 25 decided not to stage the 2020/21 Calcutta Football League. This decision was taken at a meeting of the IFA officials.

The Calcutta Football League, which was supposed to be held in August 2020 got constantly delayed due to the outbreak of the Covid-19 Pandemic, with no time-window being available for it to be held this season due to the pandemic.

That, however, hadn’t kept IFA from staging the 123rd IFA Shield and the Kanyashree Cup as part of its concerted move to reinvigorate football in West Bengal. These two tournaments were held in keeping with the Covid-19 protocols. The IFA’s commendable efforts towards this end is also evident in the fact that it is all set to stage the Uttarbanga Cup from February 28, aiming to discover new footballing talents and help them create rewarding careers in football. In keeping with this heartening trend, the IFA will also hold Futsal, the mini version of the game, from April 16.

The IFA would work to plan and play the 2021/22 Calcutta Football League in the new season.