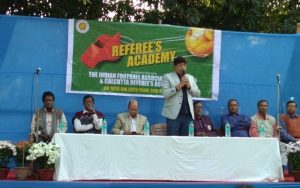 The Indian Football Association (IFA), along with the Calcutta Referee’s Association, re-launched the Referee’s Academy, which was functional during Subrata Dutta’s tenure when he was the Hony. Secretary of IFA, in a function hosted at the CRA Tent in Kolkata on Saturday, January 18.

When Subrata Dutta was the Hony. Secretary of the apex body of Bengal Football, he established a referee’s academy which eventually, got shut one year after his tenure got over. He wished Joydeep Mukherjee, current Hony. Secretary, IFA all the luck for reviving the same.

“I had established an academy for referees when I was the Hony. Secretary, IFA which was functional until one year after my tenure ended in IFA. I’m really happy that Joydeep Mukherjee, the new dynamic Secretary of IFA, has revived the same along with CRA,” he recalled.

Joydeep Mukherjee also revealed his long-cherished dream of reviving the once-functional referee’s academy and having that done now, the onus is on the IFA to successfully run it.

“There was a referee’s academy when Mr Subrata Dutta was the Hony. Secretary, IFA. To utter dismay, the academy was closed after he completed his tenure. I had always wanted to revive the same and thankfully, it has been achieved now,” Mr Mukherjee opined.

65 aspirants, including 14 women aspiring referees, have applied for admission of which 24 will be handpicked for the first batch of the aforementioned academy. Classes will commence on February 2, 2020.

Subrata Dutta, Senior Vice President, AIFF labelled referees as the “third team on the field” whose performance directly affects the match. “I always feel three teams play on the field. The third team is the team of match officials. If they don’t play well, then matches get marred. At times, we have seen most ordinary matches become exciting because of good refereeing. Along with our players and coaches, we also need to improve our referees’ quality to the world standards,” he said.

“We have coaching camps and academies for players, license courses for our coaches but we don’t have academies to groom our referees. Referees can’t be improved depending only on their talents, they need modern scientific training to hone their skill set,” Mr Dutta added.

Mr Mukherjee elaborated further that the referees won’t only be taught the laws of the game, but also communication skills and personality development — which directly improve their confidence level.

“They would get all-round training here, not only about the laws of the games but also personality development and communication skills. We would try to groom our referees who will serve the purpose and eventually, the purpose of the country. The way we are progressing in football of late, we would also need to improve in refereeing. We are hopeful to see referees of international standard from this academy in the near future,” he mentioned.

Mr Dutta also reiterated the same that this academy will provide the referees with ample opportunities to hone their skillset and upgrade themselves.

“This academy by the IFA will provide the opportunity to the referees and bring them to the mainstream of the refereeing. I’m pretty sure that this academy would supply referees of international standard in the coming days,” he rounded off.