Press Release 2020-05-30 General Comments Off on IM Vijayan: End of an are as Kerala Police trio bid adieu! 228 Views 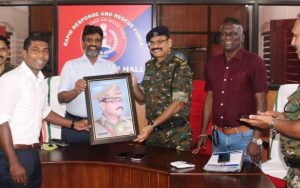 Indian football legend IM Vijayan termed it as “end of an era” as three maestros of Kerala Police – Sharaf Ali, KT Chacko and Babu Raj – retired from their Kerala Police job on Saturday, May 30.

The trio were key members in the majestic Kerala Police outfit which had mesmerised the Indian football lovers with its own signature brand of football. They, in the process, played a pivotal role in their back-to-back Federation Cup victories in 1990 and 1991.

“Yes, I’m feeling a bit nostalgic. It was like my extended family. In the department, Sharaf Ali acts as the football team manager whereas I function as the Technical Director. It’s only football which we discuss every time. That’s our life. Life moves on. We don’t know who will come next but we’ll miss them dearly,” an emotional Vijayan told AIFF Media.

Sharaf Ali, the daunting defender who made his National Team debut against Korea Republic in Nehru Cup at Thiruvananthapuram, Kerala on January 20, 1986, had joined the Khaki force in 1985.

“It’s a mixed bag of feelings for me today. When I joined the force in 1985 I didn’t foresee this day. We were like a family. We ate and slept and trained together. That was the success mantra behind the team’s success,” Ali mentioned.

With the influx of talents in the mid-80s, Kerala Police improved by leaps and bounds to become an intimidating football team in the country.

Sharaf Ali, and others were followed by CV Pappachan, the deadly attacker who still rues missing the open net from close in the 1993-94 Santosh Trophy final, which eventually cost them their third consecutive title.

“Back then there wasn’t any concept of professional football unlike now. We had to do our daily chores of duty for the Police force and then continue our training. But, it was fun, it was like shrugging off the stress at the end of day’s job,” the 60-year-old continued.

Following their maiden success in the state level in 1986, Kerala Police introduced themselves as a force to reckon with in the country but they had to wait for another four years to taste their first major trophy in the bigger stage.

Then came the twist in the tale. Although they weren’t selected for the Federation Cup in 1990, the organisers contemplated involving a local team which would, in turn, garner more footfalls at the stadium in Thrissur, Kerala. Kerala Police, under the aegis of tactician TK Chathunni, joined Titanium as the state’s representations in the tournament.

“It was like a wave of magical wand which churned out results one after another. Everyone peaked at the right moment and the positivity in the dressing room was surreal. The support behind us was unreal and finally, we could topple Salgaocar in the final,” he continued.

Meanwhile, Salgaocar, having beaten BSF and Mohammedan Sporting in consecutive finals to win the two earlier editions, came to the Federation Cup as the favourites. But the crowd-favourites had a different idea at the back of their mind.

“It was a 40,000-strong crowd who started pouring in hours before the kick-off. They were cheering at the top of their voice and it reverberated from every corner of the stadium. Papppachan hit the target twice and we became champions – it was the first national championship for us. Kerala got its champions,” the-then goalkeeper KT Chacko voiced gleefully.

Chacko, who went on to represent India five times made his debut against Romania in the Nehru Cup on January 13, 1991.

“We were a closely-knit unit. Although we joined different clubs across the country later, we used to stay in touch always. Even nowadays, we discuss those days over a cup of tea – golden days indeed,” Vijayan recalled.

After these stalwarts established Kerala as a football powerhouse in the 90s, the mantle has been passed on to the likes of Anas Edathodika, Ashique Kuruniyan, Abdul Sahal, and many more in the next decades. Sharaf Ali sounded “confident” about these boys’ football acumen who’d take Kerala ‘to a newer height’ in the near future.

“At this juncture, it feels so pleasing to see these boys excelling. With the concept of professional football creeping in they can devote more time and effort to football. It puts them in a more secured position and eventually, helps them focus more on their football career. I am confident that these boys will take Kerala football to a newer height in future,” Ali quipped.