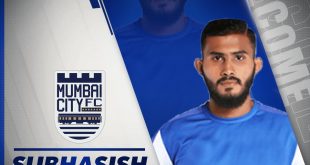 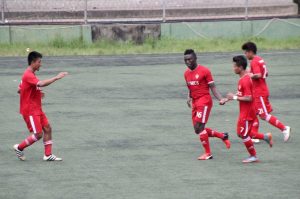 I-League champions Aizawl FC played their final Group A fixture against group leaders Ramhlun North FC today and came out victors with a 2-1 win to book their place in the semifinals.

Aizawl FC took the lead on the 20th minute with a strike from Rochharzela. They doubled their lead in the second half when Kareem Omolaja Nurain struck from the penalty spot.

Ramhlun North FC battled back and scored through Lalliansanga but their efforts were not enough for them to secure a point.

Aizawl FC finished their four group games at the top of the table with seven points, Ramhlun North FC remained second on four points with one more game to go.

The second match of the day saw an entertaining encounter between Bethlehem Vengthlang FC and the AIFF Elite Academy Under-19 team.

A goalless first half saw plenty of action with the MPL club edging the Indian youngsters and even missing a penalty. BVT FC scored right after the restart through Vanlalthanga but the Indian colts equalised eight minutes laters with Lalawmpuia finding the net finishing a beautiful cross from Edmund Lalrindika.

Bethlehem Vengthlang FC are on four points where AIFF Elite Academy U-19 on three points from three games each.