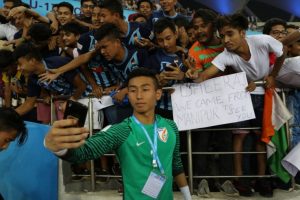 When India was given the opportunity to host the 2017 FIFA U-17 World Cup, it was going to be a competition that broke new ground, as well as introduce the Indian public to the game at a top level.

Of course, there was plenty of anticipation for how the host team would fare in the country’s maiden campaign at a FIFA competition. The task was a tall one, having been drawn in a tough group with Colombia, Ghana and USA.

Though the spirit and effort that the young Indian players put in during their three Group A matches made their compatriots proud, the quality of the opposition proved too much for the hosts, as they bowed out of the U-17 World Cup with three straight defeats.

With their journey now at an end, there is a sense of satisfaction for what this Indian side achieved. “I’m happy that this was the first time that India played in a World Cup,” India captain Amarjit Kiyam told FIFA.com. “The time we’ve all had playing together in India was a great experience.”

What made India’s three matches such a special occasion was the passion of the support they received in New Delhi’s Jawaharlal Nehru Stadium. The impact of the crowd on the Indian team’s efforts was evident in the way they played against their Group A rivals.

“The support that the entire team got in Delhi is something I will remember throughout my life, that I won’t forget,” Kiyam said. “It was the first time that the team have had such a reception, playing at any level, so it was very special. I want to thank all the fans that came out and supported the team for all the three games.”

Hosting and playing in this U-17 World Cup was always part of a bigger plan to make India a more creditable footballing nation. There is a sense that the competition has provided a valuable starting point in leading the country to new levels in the game.

“It’s important that everybody learns that the process of football in India needs to start with four, five, and six-year-olds in all the schools,” India U-17 coach Luis Norton de Matos said after Thursday’s 4-0 defeat to Ghana. “Right now, you cannot expect these boys to win against teams like Ghana or Colombia. This generation is a fantastic generation for the future, but all the things this country must do with the grassroots is needed to have results. Here in India, we’ve started the process.”

Kiyam himself believes that football’s interest in India will remain on an upward curve. “It’s going to be our endeavour to keep improving, as we go forward,” said the midfielder. “I think Indian football is improving, so the only way is up. Now that more people are watching football and taking an active interest in football, it’s something that can only help Indian football in the middle to long term.”

Previous India U-17 defender Sanjeev Stalin: We take back a lot of positives!
Next The Premier League arrives in Bengaluru for Premier League LIVE!!!