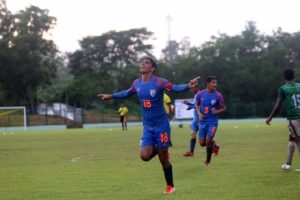 India and Nepal secured the top two spots in the 2019 U-15 SAFF Championship at the Kalyani Stadium on Thursday, August 29. India defeated defending champions Bangladesh 4-0, while Nepal trounced Bhutan 6-0 on the day.

Bangladesh, who had lost 1-4 to Nepal earlier in the tournament, needed to beat India by a two-goal margin, in order to clinch the second spot. However, the hosts came through in the end, with an emphatic result.

The match got off to a rather nervy start on a rain-drenched day in Kalyani. India Head Coach Bibiano Fernandes made as many as eight changes to his starting XI, from their last game against Sri Lanka. Captain and centre-back Anish Mazumder, midfielder Satvik Sharma, and striker Himanshu Jangra were the only ones to keep their position in the starting XI.

It was Bangladesh, who had the early initiative, but they failed to capitalise on their chances. Isac Zomuanpuia had the first real chance for India, as he capitalised on a stopping ball in wet conditions to break free of the Bangladesh defence. However, the weather Gods played spoilsport as his low shot also stopped suddenly in a puddle.

However, it was last day’s hattrick hero Himanshu Jangra, who opened the scoring yet again, as he masterfully back-headed a free-kick by Isac Zomuanpuia over the Bangladesh keeper and into the goal.

The weather Gods finally relented during the half-time break as the players headed into the tunnel. However, India had no such plans.

It was the combination of Himanshu and Isac that wreaked havoc in the Bangladesh defence yet again. Around the hour mark, Isac sent in a free-kick from the right wing, that was again headed by Himanshu into the goal.

The duo combined a third time just a few minutes later, as Himanshu nodded in a corner to score his hattrick. Renedy Meetei scored the last few minutes to make the score 4-0 for India.

Nepal, who needed a win and hope that Bangladesh don’t beat India by a margin of two goals, made sure of their three points with an emphatic 6-0 victory over Bhutan. Captain Pradip Lamsal and midfielder Niranjan Khattri scored a brace each, as Ashim Rai and Sugam Jimee scored two more late in the second half, to make it a six-goal victory for Nepal.

With Nepal taking home the three points, and Bangladesh dropping points against India, it is the Himalayan nation that secures its spot as the second-placed team in the 2019 SAFF U-15 Championship table.

Meanwhile, India have taken the top spot in the Group Table. Both Nepal and India are now set to face each other in the Final on Saturday, August 31, at the Kalyani Stadium at 3pm IST.