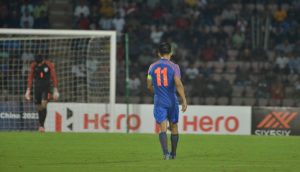 Oman made a late comeback to defeat India 2-1 in the opening Group E match of the 2022 FIFA World Cup and the 2023 AFC Asian Cup Joint-Qualifiers at the Indira Gandhi Athletic Stadium in Guwahati, on Thursday, September 5.

The Blue Tigers’ talismanic skipper Sunil Chhetri opened the scoring, but Oman made their comeback in the last 10 minutes, when Al-Mandhar Al Alawi struck a brace to win the match for the away side.

India got the early start that they were looking for, with Ashique Kuruniyan running his legs off in the attacking midfield position.

The Blue Tigers had their first real chance around the quarter-hour mark, when Thapa intercepted a ball in the middle of the park, played it to Chhetri, who put Udanta through. The winger jinked past an Oman defender and rattled the crossbar.

Soon after, Ashique was played into the box has he took the ball away from the rushing keeper Faiyz Al Rusheidi. However, 22-year-old was in too tight an angle to score.

The early pressure by the Blue Tigers soon paid the dividends, as Ashique was brought down on the left flank by Abdulaziz Al Gheilani, who went into the books for the mis-timed tackle.

It was a combination of Brandon Fernandes and Sunil Chhetri from the resulting free-kick, as they worked-out a set-piece straight from the training ground. Brandon drilled it in hard and low for Chhetri, who lost his marker and planted the sweetest of left-footers into the bottom corner, sending the partisan crowd of 22,798 at the Indira Gandhi Athletic Stadium in Guwahati into ecstacy.

With a couple of minutes left for the half-time whistle, Oman captain Ahmed Al Mahaijri had the golden opportunity to put the away side level. A cross played from the right flank found Mahaijri on the other end of it, as the Oman captain went in with a powerful header. However, India custodian Gurpreet Singh Sandhu put in a strong hand to parry it away from point-blank range; Mahaijri failed to hit the target from the rebound.

Igor Stimac’s boys applied a much more cautious approach after the change of ends, and the equaliser nearly came from the most unlikeliest of sources – a miscued clearance by Anirudh Thapa. However, Gurpreet was on hand again, to tip it over the bar. The 27-year-old custodian bailed India out again a few minutes later, when he calmly collected a precise free-header by Abdulaziz Al Maqbali.

On the hour-mark, Stimac decided to add some pace to the wings, as he brought on Lallianzuala Chhangte in place of Brandon Fernandes. While Oman attempted to get the equaliser, Sunil Chhetri tried to use Chhangte’s pace as he played the youngster through on the counter. However, he scuffed his eventual shot.

Oman left it late, but they came back in the last 10 minutes, when Al-Mandhar Al Alawi scored two to win it for Oman. For their first goal, Al-Mandhar was played into the India box via a lofted through ball, as the attacker dinked it over Gurpreet to equalise.

The 24-year-old struck the winner on last minute of regulation time, as he cut in from the left and rifled his shot into the back of the net.