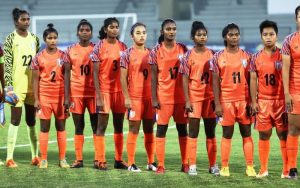 The Indian U-17 Women’s National Team will be travelling on an exposure tour to Turkey as part of their preparation for the forthcoming 2020 U-17 Women’s World Cup in India.

The girls travel to Istanbul on February 10 where they will be playing two matches against U-17 Romania Women’s National Team on February 16, and February 19 respectively. Both the matches will kick-off at 3pm IST.

“It is a really good opportunity to play two matches against Romania U-17 Women’s National Team. It’s important for us to start implementing what we are doing in training sessions. We also have plans to introduce a new formation. It’s always good for players to learn different formations,” U-17 Women’s World cup coach Thomas Dennerby mentioned.

“Romania are very strong in tackling, as well as in one-on-one situations. I expect both games will be played in a high tempo,” the coach further explained.

“The matches will enable us an opportunity to see which players are ready for play 90 minutes at a high pace. We have been working very hard to improve the endurance level,” Dennerby stated.

The U-17 girls have, earlier, had a successful exposure trip to Hong Kong before they triumphed in the SAFF U15 Women’s Championship in Bhutan in 2019 where they defeated Bangladesh to lift the trophy.