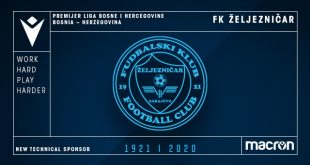 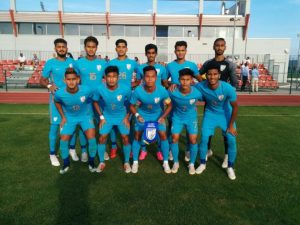 The Indian U-19 football team suffered a 0-2 loss in their first out of two friendly matches against Serbia U-19, which took place at the Technical and Training Centre of the Football Association of Serbia at Stara Pazava on Thursday, September 13.

The Indians created a flurry of chances, many more than their Serbian counterparts, across the 90 minutes but were unable to convert them as the hosts made them pay with a goal in each half.

The first 45 minutes saw the Indians start on the front foot, with forward Aniket Jadhav proving to be a menace for the Serbian defence. In just the second minute, he beat two defenders down the right flank to find space for the shot, which was not up to scratch, however, and was saved by the goalkeeper.

The Indian left-back Akash was forced off due to injury and was replaced by Asish Rai but despite the early setback, Floyd Pinto’s men continued to dominate. Aniket once again found himself in a dangerous position in the 15th minute after a quick counter-attack but could not play the killer pass at the right moment.

10 minutes later, he was put in through on goal by Ninthoiganba and shot at goal with his right foot. The effort was powerful and looked set to hit the back of the net but Serbian goalie Aleksa Milojevic pulled off a fine save to put the ball out for a corner kick.

The hosts, whose best effort so far was a long-range free-kick that hit the wall on the 20th minute, suddenly took the lead on the 30th minute from the spot after Jitendra Singh was adjudged to have handled the ball in the penalty area.

Bosic Radijove stepped up to take the kick and placed it past Prabhsukhan Gill, who guessed correctly by diving to his left but could not make contact with the ball.

Just five minutes later, India were inches away from the equaliser as the Serbian keeper pulled off another brilliant save, denying Amarjit in a one-on-one situation and stopping the Indian skipper’s effort with his feet. The last ten minutes of the first half saw the hosts in control, with a long-range effort crashing against the crossbar in the 38th minute.

After the break, the Men in Blue got the better of the opening exchanges. In the 52nd minute, Asish could not find the final ball after a fine overlapping run on the break and nine minutes later, Jeakson reached the by-line inside the box but his cut-back across goal evaded the onrushing Indian attackers.

Aniket was in the thick of things yet again as he pounced on a defensive error from the Serbians in the 66th minute. He moved past the last defender to unleash a shot, which was again parried away by the keeper. He showed great pace to beat his man after being played in by Anwar Ali in the 77th minute with a long through-ball but the Serbian centre-back put in a fine last-ditch tackle to deny the Indian forward.

Amarjit and Boris continued to pose threats but with eight minutes to play, Serbia doubled their lead with a fine counter-attacking move. Aleksandar Kostic was the scorer as he displayed great skill to convert a cross from the right flank with a first-time effort to put India’s chances of making a comeback to bed.

The Blue Colts will play the second friendly against their Serbian counterparts, which will take place at the same venue on Monday, September 17.