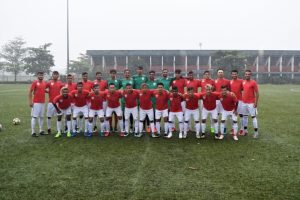 The Indian U-20 National Team participating in the U-20 COTIF International Football Tournament will leave for Valencia, Spain on Saturday, July 21.

The India U-20 National team consists of boys who represented India in the 2017 FIFA U-17 World Cup in India and the U-19 National Team boys. The team will be playing friendly matches against local clubs on July 23 and July 25 before proceeding to the COTIF Tournament where they take on Argentina U-20, Venezuela U-20, Mauritania U-20 and Murcia U-20.

The India U-20 National Team will be clashing swords with Argentina U-20, Venezuela U-and Mauritania U-20 when the boys travel to Spain to participate in the COTIF Cup – the Mini Mundial Sub U-20 Men’s Football Tournament. The tournament is slated to kick-off on July 29,. Besides, the U-20 boys will also play Murcia U-20, a local side in the tournament.

Furthermore, two players, midfielder Harmanpreet Singh and Jashandeep Singh out of twenty-three short listed players from the Khelo India Project that had appeared for trials at Indian Arrows in Goa have been selected into the final squad for the National Team and will be travelling to Spain as part of the reserves.

The UEFA Executive Committee will hold its next videoconference meeting on the afternoon of Thursday, …