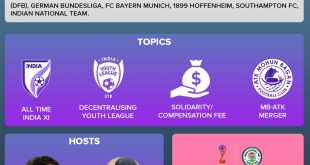 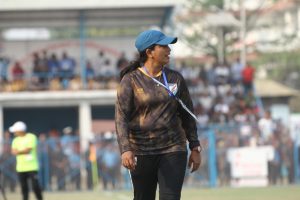 A day after winning the SAFF Women’s Championship for the fifth consecutive time, Head Coach Maymol Rocky prefers to look ahead to the next big challenge – the Round 2 of the AFC Olympic Qualifiers in April. In an interview, she talks about India’s chances at the Olympic Qualifiers, the SAFF triumph, the attitude of the players and much more.

What stood out in the SAFF Women’s Cup triumph?

The aggression and the attitude of the players throughout the tournament was incredible. They were humble, put their heads down, and worked their socks off. In the end, we have the trophy to show for it.

We lost to Nepal in the Hero Gold Cup? What made the difference this time?

This was a do-or-die fixture. Playing the hosts in a final match is a great source of energy, and the girls rose to the occasion. They silenced the home crowd. Defeating a challenging opposition is not an easy task. It was difficult. I’m glad they won the final in style.

How important is winning this tournament for the team?

After losing two matches at the Hero Gold Cup, and going on an exposure tour to Turkey, winning one out of four games – we learnt a lot. The SAFF Championship has always been our own, and it was key for us to bounce back here. Winning this adds to build the team’s confidence. It puts in a perfect situation and frame of mind ahead of the Olympic Qualifiers Round 2 in April.

How do you assess your opponents at the Olympic Qualifiers – Indonesia, Nepal and Myanmar?

Playing at the Olympic qualifiers will not be easy. We played two matches against Indonesia in January on an exposure tour and won both. However, in both matches, we had to work extremely hard and it will be the same when we face them next as well.

Nepal again will be a difficult match even though we just beat them. Having played them so frequently, a rivalry of sorts has developed between the two teams. I am sure they will come out with a vengeance, and pose a tough challenge.

Against Myanmar, we need to be at our very best. They will be at home, and are ranked higher than us. We need to focus on our strengths, and weaknesses. But if the girls can hit their stride, we can defeat Myanmar.

In April, temperatures in Mandalay can go up to 38°C. Will it have an impact?

The temperatures in Biratnagar during the SAFF Championship were also quite high, and it served as a warm-up in this regard as well. The girls responded well to the conditions, and I am sure they will adapt in Myanmar too.

You have played a number of international matches in and outside India in the last two months. How has the preparation helped develop the team?

I would like to thank the AIFF, SAI, Government of Odisha and everyone involved for their support for giving us a longer camp, hosting a tournament at home and arranging three exposure trips. Playing against teams like Romania and Uzbekistan, and some of our Asian rivals helped us prepare.

When the camp started, I felt that what the players lacked was match experience and that we could have only got by playing international matches. The federation showed immense faith in us and we are glad to have won a trophy for the country. The team is now ready and in good shape for the Olympic Qualifiers.