Home / Indian Football / Team India / India Women’s Kamala Devi: As a senior player, I have to take up extra responsibility!

India Women’s Kamala Devi: As a senior player, I have to take up extra responsibility!

Arunava Chaudhuri 2017-07-29 Team India Comments Off on India Women’s Kamala Devi: As a senior player, I have to take up extra responsibility! 877 Views 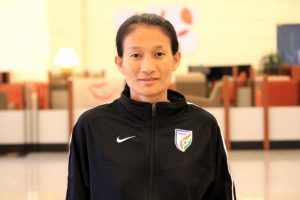 You sit on the other side of the table and realise the very first minute itself that you are actually on the wrong side. Soft spoken as she is, it is quite a task to hear what Kamala Devi speaks. You pull a chair nearby, but nothing much changes.

Quite contrarily, you mention about her being a ‘character of opposite on the field.’ Kamala smiles and the next moment you curse yourself – maybe you shouldn’t have mentioned it. Kamala has gone softer, leaving you no option to pull the chair again.

“As a senior player, it’s an extra responsibility,” she states. “There are the younger girls looking up to you and you cannot let them down,” Kamala, who first played for India in 2008 in the U-19 AFC Championship in Kuala Lumpur mentions.

“We stayed in this same hotel,” Kamala waves around in the banquet hall.

She goes numb after that, you look up and she smiles. “There was a lot of obstacles during childhood. My parents never allowed me to play and I was kept reminded that Football is a sport not for girls,” she speaks head down. “But I was stubborn enough and continued to play.”

‘But aren’t they proud of you?’

“They are no more in this World. My dad passed away long back while my mom left us three months back. Off-course they were very proud of me. I presently live with my mausi,” she informs.

“On and off the field, she is very disciplined. She is in fact, the perfect role model for other girls. And she speaks very softly,” we all smiled together, including Kamala.

“It was during the National Games in Manipur (1999) that I came to know that a Women’s Team also exists in every state. People used to hear commentary on radio and I as a small kid used to sit and hear too. Bem-di (Bem Bem Devi), Chouba-ojha (Chaoba Devi – the present Assistant Coach of the Senior National Women’s Team) were all part of that Manipur team.

Sitting next, Chaoba’s eyes lit up. “That was quite a tournament”.

“She is a very skilful player. I feel she has been blessed with all the qualities a striker should possess,” Chouba certifies later.

During her initial days, however, Kamala started as a winger. “In one of the Camps Jabbar-Sir (Shahid Jabbar) shifted me as a striker. It made me more confident as a player.”

“The more you play at the international level, the more confident you grow. You learn to work on your speed, combination, communication. This exposure tour cannot have come at a better time for us,” Kamala opines.

“We are raring to go. Maymol-Maam (Maymol Rocky, the current Indian Senior Women’s Team Coach) has been a huge inspiration for us and we want to give her a gift”, she echoes.

“I play cricket and love to play sepak takraw as well. It’s so exciting,” you can now hear Kamala from a distance. “In Manipur, the sociological focus is mostly on sports. You are encouraged to play and you will see kids playing all over. When I first started playing with the boys, I was rebuked a bit, but at the end of the first day, there was respect,” she recollects. “The boys have since then, been a huge support, encouraging me to continue playing.”

At the training session, she is one of the firsts to hit the ground. “Idhar, idhar, she shouts to the others who are walking in. The others, still quite a distance far, hears and starts to jog to Kamala’s side. You wonder – it was quite a task to hear her speak sitting next. A Footballer always has two characters – on and off the field. 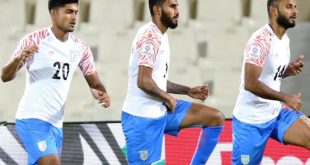 With Covid-19 Coronavirus creating havoc, several members of the Blue Tigers have come forward to …