Home / International Football / Asia / India youngsters upbeat to win it together in Kolkata!

India youngsters upbeat to win it together in Kolkata!

Press Release 2019-10-07 Asia, Team India Comments Off on India youngsters upbeat to win it together in Kolkata! 300 Views 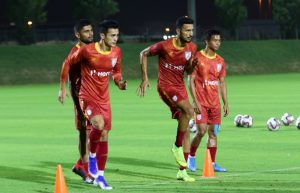 Manvir Singh, who played his heart out and earned plaudits for his exploits all over the pitch against Qatar last month, sounded confident as the Blue Tigers take on neighbouring country Bangladesh in the FIFA World Cup Qatar 2022 qualifier next Tuesday, October 15 in Kolkata.

“It’s going to be a perfect stage for us to get our first win in the campaign and we’re eager to achieve that. I played in Kolkata for a short stint and was mesmerised seeing the passion amongst them about the game. I just can’t wait to go out at the VYBK Stadium on 15th and win it together,” Manvir said on the sidelines of the ongoing preparatory camp in Guwahati, which kicked off on October 3.

The Punjab-born striker, who made 80% successful passes against the Asian champions, was praised by none other than the talismanic figure of Indian Football, Sunil Chhetri who, unfortunately, could not play his part due to an illness.

“I honestly don’t know whether I deserve to be praised like this. Sunil bhai said a lot of good things about me in front of everyone and even he wished me after the game personally. It’s huge for me,” a humble Manvir continued.

Nikhil Poojary, who started in midfield against the Maroons, sounded ecstatic while speaking about the match which was played in front of a 12-thousand-odd crowd at the Jassim Bin Hamad Stadium in Doha.

“It was a great night for Indian football, let alone all of us. Everyone played their due part and contributed to earn the desired result. Gurpreet bhai dished out one of his finest performances which will be remembered for long,” Poojary recalled.

“As coach Stimac mentioned, we have to keep our heads down and keep working to get our first win now. Unless we get to win against Bangladesh, the draw against Qatar will lose its value,” he added.

Vinit Rai, who came on off the bench against Qatar, mentioned that the ‘never-say-die’ attitude in the dressing room helped them achieve the result against Qatar in front of a hostile crowd.

“The never-say-die attitude in the dressing room helped us get the result and we can’t thank enough coach Igor Stimac for believing in our abilities. Now, we have a major task to cut out against Bangladesh in Kolkata and no matter what, we have to get the desired result,” Rai concluded.

The clash between India and Bangladesh will take place at the Saltlake Stadium in Kolkata on October 15, with kick-off scheduled for 7.30pm IST.

Tickets for the same can be purchased here: bit.ly/2pejoQ5

Previous India’s Igor Stimac: We are looking forward to play at the Mecca of Indian Football!
Next adidas launch Official Match Ball for the EA SPORTS FIFA 20 Global Series on The Road to the FIFA eWorld Cup!