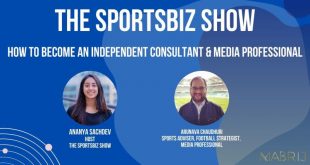 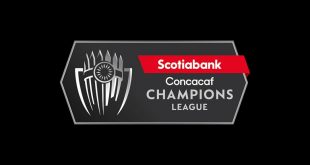 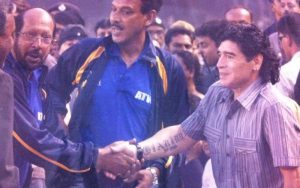 Indian football stars grieved the passing away of one of football’s greatest legends, Diego Maradona, who enthralled fans across the world with his skills and had wowed fans in India during his multiple visits to the country in the past as well.

The former Argentine captain and FIFA World Cup winner had, on his visits to India, met a number of footballing stars of the past and present. Former India international and ex-Technical Director Shabbir Ali lamented the loss that the beautiful game has suffered after Maradona passed away on Wednesday, November 25, 2020 aged 60.

“It is really shocking to hear that he has departed. This is a big loss for football. He was such a world-class player and such a big personality in the game. The fact that he could single-handedly carry teams and mesmerise crowds is something that made him all the more special,” he said.

Ali, who has been a long-time fan of El Diego, had a few near misses with the Argentine legend in his younger years – firstly in 1984 when India played Argentina in the Nehru Gold Cup, a match for which Maradona did not come to India, and secondly in the 1994 FIFA World Cup in the USA.

“I was really looking forward to playing against him or meet him on those occasions. But sadly, he did not come with the team in ’84, and 10 years later, at the World Cup, there was too much security around him,” said Ali. “But, I was happy to have finally met him on his tour to Kolkata, where I was the coach in the charity match.”

Another former India international who was present on this same occasion was Subrata Bhattacharya, who was the coach of the opposing side in the charity match.

“It was a brief meeting when we shook hands on the pitch and he asked me about which position I had played in back in my playing days, and which club I had played for,” averred Bhattacharya. “He was surprised to hear that I had been a defender for Mohun Bagan and said that he had heard a lot of good things about the club.”

Former India captain Bhaichung Bhutia took to social media to express his grief about the passing away of the footballing legend, stating that Maradona was an inspiration to him, and many others in football.

“Maradona was the reason for me to fall in love with this game. We tried doing the tricks and skills he did it on the ground. He inspired me and many more players of my generation. He was the greatest to have played the game. Rest in Peace Maradona,” Bhutia wrote.

“The man has left us. His magic, madness and legend never will,” he expressed.

“A man who brought not only unbelievable skill but also true artistry to the pitch. Football lost one of its Gods today,” he stated.

India defender Sandesh Jhingan also expressed his grief at the passing away for the former Argentina legend.