The third edition of the Indian Super League after 27 of the 56 league matches has reached its halfway stage, but the buzz and euphoria which was there around the ISL is currently somewhat missing.

It seems a usual problem with football leagues in India that season one is an instant success due to hype and the interest in something new, but sustaining it has been a problem. Even the old National Football League in 1996/97 kicked-off to much hype like the I-League in 2007, but when in October 2014 the ISL kicked-off this great feeling of a new are in Indian football kept the league going through its inaugural season as I myself remember in having been a part of it.

Though I haven’t seen any ISL-3 matches live at any ground, but watching it on television, speaking to friends and contacts, other people have a similar impression that the overall ISL product isn’t having the buzz and drive which it has had in the past.

Except the Kerala Blasters and NorthEast United FC, all other franchises are struggling to fill their grounds with spectator numbers dropping considerably especially the case of Atletico de Kolkata is surprising, then they have been filling the Saltlake Stadium with 40,000 plus spectators in the first couple of seasons, but now they can’t even fill the Rabindra Sarobar Stadium’s 12,500 though the stadium is right in middle of south Kolkata.

And one thing is also visible that in certain areas less money is being spend by or on the ISL, which has its reasons of massive losses for the franchises, the lack of clarity on how the new 2017/18 season will look like and a difficult market of getting quality footballers with the marquees not really having the names of those of especially season one.

Some of the above cannot be rectified, but there are some things which can be done before the ISL-3 ends in December, then I hope that in the end one doesn’t look back at Season 3 and says, it’s a season lost or it was a season of consolidation. That would have been the wrong approach, then it continues to be important to push the ISL and Indian football as a product amongst the masses. 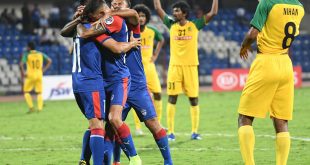