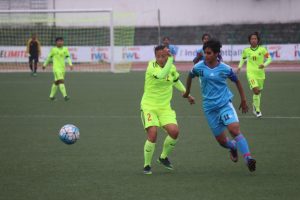 Rising Student’s Club opened their account in the Indian Women’s League 2017-18 after they held KRYHPSA to 1-1 draw at the Jawaharlal Nehru Stadium in Shillong on Saturday, March 31.

Anju Tamang scored the opening goal with a superlative strike in the 76th minute before Ratanbala Devi equalised in the 78th to split points.

The match began on an even note with both teams having a look at the goal in the opening minutes. Sanju had a crack at the goal while Ashalata had a free-kick of her own. Sanju shot one over in the 10th minute while Prameshwori came close in the 13th minute.

The match turned cagey after that as the teams were unable to create any clear cut chance. Ashalata was the driving force behind the team who directed the ball to the forward line of Ratanbala and Dangmei Grace.

Ratanbala had a shot on goal in the 37th minute but it went way over. On the other end Pyari had a free header but it went wide as the half ended goalless.

Bala Devi came on in the second half to help the KRYHPSA cause and it showed immediately as she combined will with Ashalata and Ratanbala to trouble the Rising Student’s Club defenders. Bala missed a header in the 66th minute before Ashalata had a crack on the goal in the 69th minute.

Two chances went begging soon after as first Bala’s header went straight to the keeper in the 71st minute and then she missed a simple tap in the 73rd minute. Just as it seemed a KRYHPSA goal was inevitable, Rising Student’s Club struck on the counter. Anju Tamang finding the net from 25-yards out.

But the joy was short lived as Ratanbala scored from a goal mouth melee only two minutes later to level the tie. KRYHPSA almost took the lead a minute later but Suprava pulled out a stunning goal-line save to keep Ratanbala at bay.

Lochana had a shot of her own blocked at the other half as the minutes ticked by and the match ended in a draw. KRYHPSA next play India Rush SC while Rising Student’s Club take on Sethu FC, on April 2.