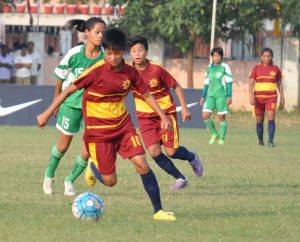 The ninth day of the preliminary round of the inaugural edition of the Indian Women’s League saw Eastern Sporting Union defeated KRYHPSA FC 4-1 in a Manipur derby, while Kerala’s Quartz SC trashed Royal Wahingdoh FC of Meghalaya 6-0 in a one sided encounter.

Eastern Sporting Union went ahead in the 83rd minute when O. Bembem Devi scored for the second time before Mandakaini Devi sealed the 4-1 win by scoring her second only two minutes later.

Meanwhile in the other game, Shillong’s Royal Wahingdoh FC suffered another heavy defeat and this time to Quartz SC of Kerala.

The goalscorers for Quartz SC were Mamata Kumari in the 33rd minute, Manpreet Kumari scored in the 36th, 38th, 78th minutes, Reshmi Kumar in the 53rd minute and Tara Khatun in the 90th minute.

Reshmi Kumari of Quartz SC was named Player of the Match.