India’s Anirudh Thapa: Gurpreet-Paaji has helped me in various situation! 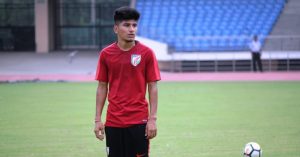 Anirudh Thapa, one of the brightest young talents of the country revealed that he used to get bullied by other boys in his childhood for not being as physically as strong as them. But, he didn’t give up and finally, could lay a hand on the prestigious ‘AIFF Emerging Player of the Year’ award.

“As a kid, I used to play with the bigger-sized boys who were playing seriously whereas for me it was nothing more than a fun. I used to get bullied these days because I wasn’t as big as them,” he smiled during a media interaction in the Capital. “But, I didn’t give up and continued to eventually reach here where I’m today,” he recollected.

“I was not extraordinary in studies, unlike my elder brother who is an engineer. I pushed myself into Football and my dad backed me to pursue my dream. He used to take me to various camps and finally I landed up in the AIFF Academy where I started honing my football skills,” the 20-year-old midfielder stated.

Thapa mentioned that it was a ‘dream-come-true’ moment for him to start in the Hero Intercontinental Cup in Mumbai and he wholeheartedly thanked the senior players for backing him.

“The Intercontinental Cup was where I made my first senior team start and it was nothing short of a dream-come-true moment for me. Through the tournament, the senior players helped me settle down well and we always look up to them and learn the nuisances of the game.”

Meanwhile, Thapa made a special mention of Gurpreet Singh Sandhu who helped him on various occasions to come up as a better player.

“Someone like Gurpreet-paaji was extremely welcoming and helped me in various situations.”

“Everyone in the team keeps telling me to hit the gym and put on some more mass. Playing in central midfield is a tough job as you get sandwiched by defenders as well as strikers,” the Uttarakhand-based player added.

“Representing the country is an achievement and in the next few months, we’re going to play the AFC Asian Cup. We won’t make it an easy job for the coach when he selects the team for January. We are fighting hard for the limited slots in the team.”

“SAFF is a tournament where we have generally been successful. Whether we’ll come back with the trophy from Bangladesh or not, that depends on time. But, we can assure that we won’t throw in the towel without a fight and we’ll give 100% on the pitch to accomplish the goal,” Thapa mentioned.

India will take on Sri Lanka in their opening fixture of the 2018 SAFF Cup in Dhaka on September 5.

Previous FIFA to analyse technical outcome of Russia 2018 with member associations in London!
Next Granada CF’s new 2018/19 shirts from Errea bring together the classical & the innovative!