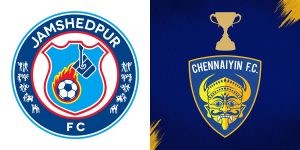 Jamshedpur FC came into the match with their two key players, Piti and Sergio Castel out of the contest. Chennaiyin FC under their new coach Coyle were making steady progress and clawing their way back into the league.

The match started with both teams taking a cautious approach. The first attempt of the match came at the 10th minute. Lallianzuala Chhangte skipped past a defender brilliantly, dashed forward on the left flank and put in a cross only for it to be held by Subrata. Jamshedpur FC tried to return the favour by pulling off a similar effort down the left flank with Aitor Monroy putting in a long cross to find CK Vineeth only for him to put in a wide cross. Chennaiyin FC were upping the tempo and had a cross cleared out by Tiri.

Chennaiyin FC finally broke the deadlock at the 26th minute. Rafael Crivellaro twisted and turned with the ball on the right, just outside the box, and then crossed it to Nerijus Valskis inside the box, who took a sublime touch inside the box and shot from the right towards the far post. Moments after, Noe Acosta was brought down by a harsh tackle for him to be taken off at the 35th minute and be replaced by Jitendra Singh. Aitor Monroy was at it again as he put in a very good through ball over the top for Farukh Choudhary on the right flank. He rolled it on the first time towards the centre of the box to Sumeet Passi, but Eli Sabia got to the ball first and cleared it out.

The first half ended with Chennaiyin FC leading 0-1 over Jamshedpur FC.

The second half began with substitution with Aniket making way for Mobashir. Jamshedpur FC began the half on a better note as Farukh Choudhary tried his luck from the edge of the area but was blocked by Edwin Vanspaul. The rebound went to Aniket Jadhav on the right, he took a touch and then put in a cross but there was no one behind it. Jamshedpur FC made their final substitution with Isaac coming in for CK Vineeth. Against the run of play, Rafael Crivellaro made a run down the centre and passed it to Lallianzuala Chhangte on the left who beat one defender but ran towards his left and ended up hitting the shot straight into the hands of Subrata.

The second half of substitutes, Aniket and Isaac were putting on a hell of a show. Aniket had a brilliant effort from outside the box following a corner only for it to be deflected by the Chennaiyin FC defender. Chennaiyin FC had the opportunity to close the game as Lucian Goian took the free-kick from his own half. Rafael Crivellaro dummies it to put Lallianzuala Chhangte through on the right who ran with it and put in the cross but Schembri failed to get the all-important vital touch to it.

And they were made to pay. Aniket Jadhav made a run into the box, he beat two players in front of him and passed it to Sumeet Passi who squared it towards Isaac Vanmalsawma. The midfielder took a touch and then took a shot as it brushed Farukh Choudhary before going past the keeper into the goal at the 89th minute. At the brink of full time, Jamshedpur FC were presented with a golden opportunity to win it with a free kick being floated into the box. Aniket Jadhav attempted a shot towards goal but it hit Farukh on the way and nearly went in. The match ended 1-1.