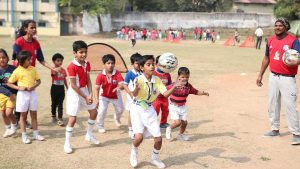 The festival saw a stupendous response as over 500 children participated between the age group of 3-11 years from the JUSCO School South Park. The members from Red Miners volunteered and helped in the overall operations of the entire festival.

Mili Sinha, JUSCO School South Park Principal, expressed her views of the football festival as she said, “It was great to see the kids have fun during the festival. Football is one of the best sports in the world and with so many little ones being JFC fans, we were glad to assist the club to conduct the Grassroots Festival.”

Kundan Chandra further added, “The response from the students of this school was magical and enthusiastic. We got over 500 registrations in one day itself. I appreciate the response and we plan to extend our hand further with JUSCO School South Park in the coming weeks with a Football School.”