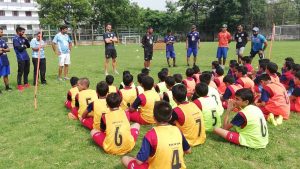 The Advanced Training Programme is for kids who have been regular and have been performing well in their respective Jamshedpur FC Football Schools. This training will be given to the kids over and above the usual grassroots football training they receive, at no extra cost.

The kids that get selected will get a unique opportunity to train with the club’s Youth Development coaches in Kundan Chandra, Indranil Chakraborty, Akshay Das and Adrian Dias under the guidance of Carlos Santamarina, Head Coach – Jamshedpur FC Youth Teams (TFA). The training sessions will be held once or twice a week at any one of the TFA training grounds.

Kundan Chandra, Head of Grassroots – Jamshedpur FC, shared his thoughts on the improvement he has seen over the month. “When we launched our football schools, the kids were learning the game from scratch, just like they start learning alphabets and numbers in kindergarten.”

“After just few months of daily training, especially the ones who have been regular, we can see a massive growth in their game. It’s something all our grassroots coaches should be proud of. At this rate, I am sure we will see top-notch players for the club, state and country in the coming years.”

“We will soon also be doing the Advanced Training selection process for the girls in our football schools too and later with our training centers with TSRDS.”

The key observer, Carlos Santamarina, shared his delight as he said, “There is so much potential here. Tata Football Academy has had its U-16 & U-18 teams in the past three decades (and most recently also its U-14 teams), and now we also look forward to working with the U12 & U10 age-groups. We all are excited with the prospects that came in today for the selection.”

The selection results will be announced soon, after the coaches analyze the best few prospects for the U-12 and U-10 age-groups from the 128 boys that came for the selection.