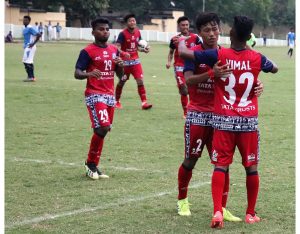 The Jamshedpur FC Reserves won the second edition of the JSA Super Cup as they beat Tata Motors 3-0 in the final at the Tinplate Stadium. The teams had their tasks cut out with the heavy rainfall causing an additional challenge during the match.

The Jamshedpur FC Reserves put three past Tata Motors in quick succession in the first half as Vimal Kumhar scored in the 16th & 28th minute and Karandeep added a third in the 32nd minute.

The Jamshedpur FC Reserves will also commence its preparation for the Durand Cup with an exposure tour to Bhubaneswar, Odisha. They will be playing four practice games against the India U-16 team, Sports Hostel Odisha and the India U-19 team which is slated to play in the AFC U19 Championships qualifiers in November.

The Jamshedpur FC Reserves will play twice against the India U-16s, once against Sports Hostel Odisha and conclude the tour with the final game against India U-19. The India U-19 team consists of Jamshedpur FC senior team players such as Amarjit Kiyam, Narender Gahlot, Jitendra Singh and goalkeeper Niraj Kumar.

Defining the purpose of the tour, Head Coach Kundan Chandra said, “We have played a lot of matches in the last few months. We got an opportunity to play more than 14 games in the last two months in the JSA Premier League and JSA Super Cup. The league had some good teams like Babulal Soren FA, Tata Steel and Tata Motors which helped us to test our tactical play. These games have given the boys time to gel in our playing philosophy and we look forward to build-on it in the upcoming tournaments and eventually the Second Division League.”

“We look forward to the friendlies against National youth teams and Sports Hostel Odisha. These feature some of the top India players who are already playing for the National team as well as ISL clubs, including ours. This will help the boys gain more game-time before travelling to Kolkata for the prestigious Durand Cup as well as provide our Reserve team players to exhibit their talent in front of the Indian National Team coaches.”

The travelling contingent features four Tata Football Academy (TFA) U-16 cadets and eight TFA U-18 cadets and is line with the club’s philosophy to groom and promote players through the youth ranks.

Jamshedpur FC CEO Mukul Choudhari, underlining the importance of the tour said, “The players in the Reserve Team are ultimately aiming to knock the doors of the First team. It’s important for them to play with quality opposition. This tour will enable our Reserve team to compete against the top youth players of India, many of whom have been part of the India U-17 World Cup squad in 2017.”

After finishing the exposure tour in Bhubaneswar, the team will travel directly to Kolkata to participate in the Durand Cup 2019.