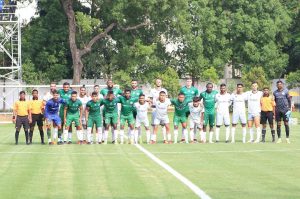 ISL League champions Jamshedpur FC went down 0-2 against I-League side RoundGlass Punjab FC on Saturday, September 24 in a pre-season friendly at Jamshedpur. A goal in the 60th by Ronaldo Oliveira and Daniel Lalhlimpuia’s strike in the 90th minutes saw the visitors walking away victorious.

After producing a draw against FC Goa, the Men of Steel returned to Jamshedpur to continue their pre-season campaign. They went toe-to-toe with RoundGlass Punjab FC at the Flatlets. Aidy Boothroyd made some changes to the starting line-up and played Eli Sabia, Jay Emmanuel Thomas, Harry Sawyer, and Daniel Chima as his four foreign starters on the pitch. Young goalkeeper, Vishal Yadav was also handed a start.

The Men of Steel began their hunt for the lead from the very beginning. With a couple of chances from open play and set-pieces, the squad kept knocking on the opposition’s door. The two sides kept charging at each other’s box to take the lead over the other in the first 45 minutes of the game.

Jamshedpur FC will be hosting Sreenidi Deccan FC next in a pre-season friendly on September 28.