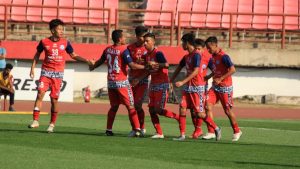 The Jamshedpur FC U-18 team kicked off their season in the Hero Elite League on a high. Let’s get started on what went down on Day 1 of the league with their first game against SAIL.

The first seven minutes of the game was a constant push and pull between both the teams. Finally, the opportunity arrived when Ravi Bahadur Rana went free on the left flank and shot a cross to Wungshungam Jagoi only for the goalkeeper to intercept it.

In the next few minutes, SAIL created good chances, but their forward got caught offside. Around the 17th minute, Jamshedpur FC won a free-kick at the edge of the box. Ravi took the shot, however, he ended up hitting the wall. In the next minute, SAIL took the lead by scoring against a run of play.

The boys kept pushing to level the score. Sorokhaibam put in a low cross for Wungshungam Jagoi, but the SAIL goalkeeper intercepted again and put it out weakly, only for Gaurab to collect the rebound inside the box and score an equaliser.

The team later created several chances with Sorokhaibam in the thick of things. He nutmegged a SAIL defender and got inside the box and shot, but the keeper blocked it. At the 42nd minute, the boys won a free-kick deep into the final third on the right flank. Gaurab crossed in a beautiful ball from the free-kick, but the forwards failed to connect it and the ball got cleared out.

Jamshedpur FC U-18 called in for substitution with Wungshungam making way for Lalruatmawia. And the decision couldn’t have been more impactful as he took a shot from the long-range. Unfortunately, the shot was denied by the crossbar.

The next minutes saw a few good movements on the left flank as Piyush linked up with Sorokhaibam who skillfully weaved his way past the SAIL defender into the box. He laid a good pass to Lalruatmawia whose flick sadly went into the goalie’s hands.

The final few minutes witnessed what could only be described as some serious footballing action. At the 87th minute, a delightful cross from Sakir Ali helped Ravi Bahadur Rana give the team a much-needed lead with its second goal. Sakir Ali was subbed in as the last substitution for Sorokhaibam just moments before the second goal.

5 more minutes were added to the clock and the young guns of Jamshedpur FC decided to make the most of the added time thus scoring two back to back goals. Sakir Ali scored the third goal with an assist from Ravi in the 92nd minute, Ravi once again scored with a sublime penalty thus finishing the game with a score of 4-1, giving the team an emphatic win on Day 1.

Previous It is all or nothing as Mumbai City FC host Chennaiyin FC!
Next iSportconnect successfully holds their eSports Masterclass!