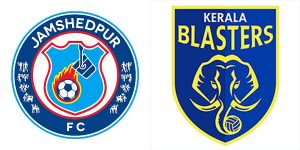 The last time Jamshedpur FC faced Kerala Blasters FC, the surroundings were different, the crowd was different, and both the teams gave the audience one of the most entertaining, nail-biting draws of the season with a 2-2 scoreline. Where Jamshedpur FC got their goals through a penalty (Piti) and a goal (CK Vineeth), Kerala Blasters during the last few minutes levelled it fantastically all thanks to Messi Bouli.

A lot has happened since then. Jamshedpur FC has been pushing hard despite the results not turning in their favour, while Kerala Blasters have won a couple of games after their winless streak.

After the last defeat against Bengaluru FC, Coach Antonio Iriondo and the team will be eager to turn things around as they fight for the playoffs tomorrow night at The Furnace. The team would mostly be looking to bank in on one of the most consistent performers of the season, Aitor Monroy along with Farukh Choudhary and Aniket Jadhav to name a few.

Kerala Blasters FC too would be fighting for the crucial three points and the playoffs. With players like Bartholomew Ogbeche , Mario Arques and Messi Bouli in hand, Eelco Schattorie and his boys would be gearing up to give a good fight.